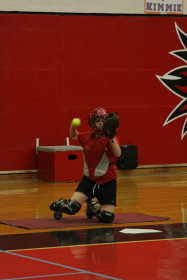 The Southeast Missouri State University softball team is ready to pick up where it left off last season.

"We had a great finish in the OVC Tournament, and so we're definitely looking forward to having the season open with a veteran group," coach Lana Richmond said.

The Redhawks are coming off a fifth-place finish in the OVC in 2011. In the OVC Tournament, the team nearly secured a berth to the NCAA tournament but ended up one win short. The team lost to Jacksonville State in the championship game 9-5 and ended the season with a 31-30 record.

"All of them have one goal in mind: winning the OVC," Richmond said about her players. "I mean, that's a goal that they all have, and they're all focused on 'This is what we have to do.' Everyone is focused on their job that they have to do and their roles."

Southeast was picked to finish fifth this season by the OVC Preseason Coaches Poll, which is voted on by coaches and sports information directors. Jacksonville State, Eastern Illinois, UT Martin and SIU-Edwardsville were all picked higher and were the only teams that finished ahead of Southeast last season.

"I always like to be the underdog, so it works out in our favor," said senior shortstop Renee Kertz, who was second on the team with a .328 batting average last season. "I think everyone's focused and everyone has their eye on the prize, so we are all working really hard."

Including Kertz, Southeast returns six position players. Also, four members of the pitching staff will return, including sophomore pitcher Alora Marble, who led the team in wins with a record of 18-8 and was named to the All-OVC second team. Junior pitcher and utility player Taylor Cowan will also return. Cowan won six of the seven games she started as a pitcher and was second on the team with eight home runs.

"For softball, the people in the circle have got to do the job for you, and I think that's where it is going to be our biggest impact this year because freshmen are now sophomores," Richmond said. "We have a junior that is in her second year of full-time pitching. We've got those pitchers who pitched a lot of innings last year that are back along with the mix of a freshman. That adds to a pretty good staff, so I think our impact is going to be the experience and maturity gained from our pitching staff."

The Redhawks' season starts at 4 p.m. Feb. 9 at Jackson State. The team's first tournament will take place Feb. 10-12 in Monroe, La. at the Mardi Gras Classic.

"I think there are a number of things that they can do well, but if I had to play tomorrow they would be ready," Richmond said. "I just feel that they would be ready and that's based on returning a veteran team, and we've been able to accomplish a lot in the fall and up until now in our preseason.

"I mean, we've covered a lot, but it's just a matter of putting some finishing touches on some things with our hitters and our pitchers and catchers."