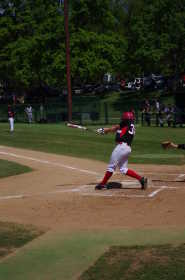 Several Redhawk flags sway in the wind beyond the left-center field fence during each Southeast Missouri State University baseball game.

Some people sit in the beds of their trucks with a cooler of beer or stand on the field's electric box as they heckle opposing players. Others pull up picnic tables, and some stand on the fence.

This group of people is known as the High Hill Hecklers.

"We are fans just like the people who sit on the other side in the grass on blankets," Rob Foeste said. "We just get a little bit more rowdy over here."

Foeste, who was born and raised in Cape Girardeau and is a former Southeast student, has been a fan of Southeast baseball all his life. Foeste became a member of the Hecklers in 2000 and once owned a bar called Hecklers on Sprigg Street.

The Hecklers have been around long before Foeste joined, though.

"We didn't start it. It's been going on for generations," Foeste said. "It's a community up here. It's a symbol more than a group of people."

The group includes Southeast students, Southeast alumni and both young and old members of the community. Everyone has a cooler of beer and some kind of Southeast gear, whether it's a shirt, a baseball hat or a flag on their truck when they arrive on Cherry Hill, the official name of the spot the Hecklers occupy during games.

"We all come from different walks of life," Foeste said.

Foeste said anyone can join him and the rest of the Hecklers to watch the baseball game as long as they follow a few rules, such as clean up after yourself, don't stand in front of people's cars and block their view and, most importantly, have a good time.

Shane Blair behind the plate during Southeast's game on Saturday. - Photo by Nathan Hamilton

Hecklers greet newcomers with an ice-cold beer and a handshake as they walk up Cherry Hill.

"You walk up here and present yourself as a respectful person, you can pretty much come up here anytime you want," said a Heckler, who asked to be identified under the alias of Stevie Johnson.

While the Hecklers all enjoy each other's jokes and have a good time, the opposing team's outfielders might have a different opinion of them.

"Center field and left field are the two worst positions to play out here," Johnson said. "They catch it the worst."

Foeste remembers a time when he and the Hecklers were at a game between Southeast and Missouri State when the Bears' Ryan Mantle couldn't handle the heat from the Hecklers' jokes. Mantle began giving Foeste and the rest of the Hecklers information about all of his other teammates so they would move on and leave him alone.

"He threw all of his teammates right under the bus," Foeste said.

The Hecklers used to have to call media departments to try to get information about some of the players and used that to get in the head of the opposing team's players.

"It's all a mental game," Foeste said.

Foeste said the invention of Facebook and other social networks have made it a lot easier to find information about players they can use. The Hecklers look up opposing teams' girlfriends, sisters and mothers to use their names in jokes.

This is part of the reason why some sports teams are not allowed to have Facebook or use other social networks while the season is going on.

"It's just about having a good time," Foeste said. "They're used to it."

The baseball teams aren't the only ones who get attention from the Hecklers.

They aren't just out there to heckle the other team and bother the Frisbee golfers. They do a little entertaining, too, as Foeste calls it.

"Beach day and meat day are two of our most fun days out here," Foeste said.

On beach day the Hecklers lay out a tarp, pour sand down, set up a Slip 'n Slide with water and sit out in flip flops and shorts like they are actually on the beach. Meat day is when everyone brings hot dogs, burgers or steaks to put on the grill to celebrate their biggest grilling day of the season.

"Tell him about the tiki torches and the bar," another Heckler said.

In addition to beach day and meat day, an older Heckler reminded Foeste of the time they lit tiki torches when it got cold and also when they set up a bar on Cherry Hill during a game.

"Now that we don't have doubleheaders, which is a sad state of affairs, we come out here and play wiffle ball," Foeste said. "This gives us enough time to get a few beers in before the game, so it's kind of like a doubleheader."

Some of the Hecklers who attend every Southeast baseball game don't know each other outside of Cherry Hill, but while they are at a game one would think they have known each other all their life.

Southeast baseball is the reason they all come together and hang out.

"It's about the game, not about us," Foeste said. "We are just people who love the game."

Hogan and the Southeast baseball team notice and appreciate all of the support they receive from the Hecklers each game.

"They're unbelievable," Hogan said. "I think they are some of the best fans in the OVC, if not the best."

Foeste doesn't believe the tradition will ever end.

"It'll keep on as long as baseball is played," he said.