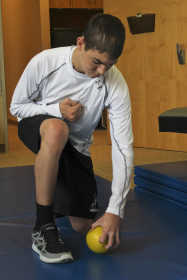 16-year-old Nolan Weber loves playing sports, especially baseball, but has had to adjust to the obstacles of living with a brain tumor.

The Jackson High School junior uses only his right hand to field, catch and throw the ball due to a lack of mobility in his left side.

On April 7, 2011, Weber's parents got a call around lunchtime from one of their son's very good friends. Nolan had had a seizure during English class.

"He was fine that day," Nolan's mother Rachelle Weber said. "He had actually pitched an entire game two days before."

After the phone call, the Webers went straight to the emergency room at St. Francis Medical Center. Nolan had suffered a general seizure and his whole body was affected.

Nolan showed no signs of any health problems leading up to the seizure, aside from some difficulty moving his left side. The Webers attributed the issue to knee problems that Nolan already had from running.

"Within three hours of being there, we were on our way in an ambulance to Children's [Hospital at Barnes-Jewish] up in St. Louis," Rachelle Weber said.

After an MRI that evening, the Webers learned that Nolan had a tumor in the right side of his brain.

"It just caught us by surprise," Rachelle Weber said. "It's not like we were prepared for hearing anything like that."

A surgery to remove the tumor was scheduled for the next Friday and was successful. Nolan returned home the following Wednesday, went to his first therapy session on Friday and was baptized Easter Sunday.

A week after Nolan's surgery to remove the brain tumor, the Webers received news that the tumor was a malignant glioblastoma multiforme, or GBM. Nolan was diagnosed with brain cancer.

For the next few months, Nolan went to therapy three times a week and underwent chemotherapy and radiation treatments at the same time. Every weekday for seven weeks, Nolan had to leave Jackson at 5 a.m. to reach St. Louis by 7 a.m. for his radiation treatment, which took about 15 to 20 minutes. Three times a week, Nolan went to therapy immediately after returning home.

By the end of the summer, Nolan had regained most of his strength in his left side. He made tryouts for his high school soccer team and played for both the varsity and junior varsity teams.

"By the end of September, we noticed a few small things, changes that kind of concerned us, so we had him do another MRI," Rachelle Weber said. "On Oct. 1 they found that it had returned. They really didn't want to take it out surgically. I hate calling it inoperable, but that's really what they classify it as."

After a clinical trial at Children's Hospital at Barnes-Jewish that was not successful, Nolan was accepted into a clinical trial at St. Jude around Christmas. During the trial, he has been taking chemotherapy pills every night. Nolan has had two check-ups and his tumor has remained stable.

His hometown as well as surrounding communities have supported Nolan and his family since his diagnosis. Jackson businesses are decorated with signs that say "We Believe," a slogan the Weber family adopted after a visit from their pastor after Nolan's relapse.

"That was the message, believing that you have been healed," Rachelle Weber said. "At first that was what got us through those first few days, then it turned into weeks, and then it turned into months. We went through our whole house. My husband wrote believe on every single mirror, window, just so you saw it everywhere you looked. And it just kind of grew from there. It was pretty amazing."

The support didn't stop there. Hillarie Mueller, a field representative for Southeast SportsCare, organized the High Heel Dash, a fundraiser for the Nolan Weber Benefit and Friends of Brody, a charity for another young boy from Jackson who died last year after fighting brain cancer. Half of the money raised will be split between the two charities, and the other half will go to the SoutheastHEALTH Foundation.

The High Heel Dash is a two-block run in heels for women, men and children of all ages. It is a race designed to make participants look comical while raising brain cancer awareness and money for the two charities.

"It's just a great benefit for a really great cause," Mueller said. "The whole town of Jackson has kind of just rallied around these two families. And these families, they really appreciate everything we do for them, and they're just so thrilled that we're thinking of them."

Rachelle Weber is excited to see the turnout and the participants run in their heels by her side.

"It's just like running in somebody else's shoes," Rachelle Weber said. "That's exactly the way it is. I'll run miles in heels if that's anything like what he goes through."

Registration is $20 for participants ages 18 and under and $30 for participants over 18. Pre-registration for the High Heel Dash ends Friday. Those who register before that date receive a $10 discount on the entry fee. The first 100 participants to register receive a free T-shirt and race bag. Same-day registration begins at 9 a.m. Saturday. The first heat of the dash begins at 10 a.m. on High Street in Jackson. Prizes will be awarded and donations will be accepted. For more information visit the Southeast SportsCare Facebook page