A day in downtown Cape Girardeau 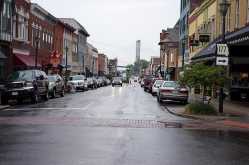 Downtown Cape Girardeau in the daylight. Photo by Nathan Hamilton

The All Good Grill is the first establishment of its kind to be approved for Cape Girardeau. The small street food vendor is run by friends and co-owners Kennith Evans and Mike Wenderski.

They bounced the idea around for a few years, but it really took hold when they went to a concert and set up a grill for their own use. People wanted to buy their food, and the idea finally became a reality. They've been doing their thing for about three years now and want to continue as long as they can.

"It's like a public service," Evans says at 1 a.m. "We're sobering these people up."

They estimate they serve about 150 to 300 people an evening, with the peak serving time being around 1 a.m. They sell hot dogs, burgers, pulled pork sandwiches and beef or pork meat sticks. 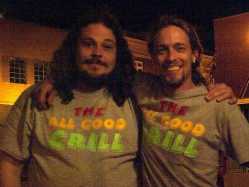 Kennith Evans and Mike Wenderski own The All Good Grill. Photo by Colby Powell

They are located next to Mixing 10 on Main Street on Friday and Saturday nights, and they spend Tuesday nights at Slingers. Their hours are always 11 p.m. to 2 a.m.

Only the dull orange glow of the streetlights and the glare from the bridge lights the path. Few cars go by, and even fewer patrons are awake this hour. The air blows cold from the river. The dark and the chill don't bother Shelby Potts at 5 a.m.

Potts, 22, is a Cape Girardeau native and has been coming to the river on sleepless nights nearly his entire life.

"The history of this place is awesome," Potts says. "At this time it's very peaceful. It's a nice place to come and think."

Potts has multiple tattoos, all having metaphoric significance to him. Of his many tattoos, his most interesting is a captain going down with his ship on his right arm.

"It represents the struggles I've been through -- sinking down and getting back up," Potts says.

Potts also likes to ponder about the workings of the universe and contemplate his religious beliefs while he is at the river.

"I'm a firm believer in taking life as it comes," Potts says. "If it works for you then go for it. You should search for the truth yourself. Here at the river is a great place to do that."

The sky is overcast and the wind blows briskly at 7 a.m. as runner Vicky Meyer jogs along the riverfront in what she thinks is the perfect weather. 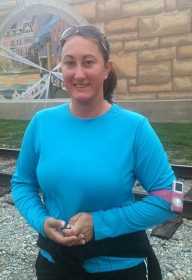 "The weather is great," Meyer says. "It's almost better sometimes when there is no sun because then it's not too hot yet. Get it out of the way early, and it's beautiful out."

Meyer is in town visiting her parents, who live downtown in Cape Girardeau. She runs downtown whenever she comes to visit them.

"It's really scenic and sometimes there is barges or trains or there is always something pretty to look at," Meyer says. "I was actually going to take a picture and send it to my friends in St. Louis and say 'Look at what I get to see this morning.'"

Meyer says she is doing interval training more and usually works out for 45 minutes to an hour.

"I am training for a 5k," Meyer says. "Hopefully in St. Louis. There is one called the pumpkin run, which is lots of fun every year in October."

At 11 a.m., Renaissance, a lifestyle shop on the corner of North Main Street and Broadway, has been open for an hour.

"By 11 o'clock, things are really getting brisk with customers from all over the United States," says Sherry Yaeger, co-owner of the store with her husband Mike. "We've had people in today from Texas, Chicago, Kansas City and all over this region here, too. We get customers from everywhere." 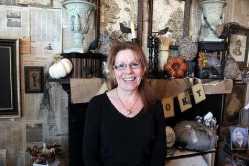 The Yaegers opened up the shop 11 years ago. Since it's opening, the store is constantly changing. Yaeger describes the business as a lifestyle store because people can shop for multiple items for their home.

"I have some people who walk into the store and say, 'Oh this is like a shop that you would see in New York or Paris, or someplace like that,'" Yaeger says. "I try to bring a little bit of the world to Cape Girardeau."

Yaeger chose the name Renaissance not because of the time period, but because renaissance is about rebirth, renewal and change.

"People and their homes are always needing just a little piece to tweak up what they've got," Yaeger says. "It's a rebirth, renewal and change kind of thing."

Annie Laurie's Antiques is a downtown establishment that not only provides shopping, but also gives Southeast Missouri State University students experience in a growing business. Students from Southeast often model for photo shoots done at the shop, have internships at the store and some, like former Southeast student Brandon Rains, get the chance to work there. 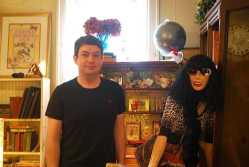 Rains was a double major in general art and fashion merchandising, and after completing his internship at the store, the owner Laurie Everett asked him to stay as her personal assistant. He works at the store creating displays, working on the mannequins and doing whatever needs to be done in the store that changes every day.

"It's very diverse with our clientele," Rains says after coming back from running an errand at 11 a.m. "College students ... and the older generation 50 to 60, I think it caters to a larger demographic. There is so much in here, and so much space is used. Every wall is covered with something. There is something for everyone, I think. I think it's kind of funky and different. It's not your common antique store. When people think antique store, they think old, old stuff. Here it's just retro and cool."

Business is good at the Cup 'N Cork on Saturday afternoon at 2 p.m. Lunchtime is an active time at the hybrid coffeehouse and wine bar in downtown Cape Girardeau.

Hannah Smith sits with her friends, Emily Sajdak and Maya Hamba, at a table in the corner of the café. In between spoonfuls of her chicken and andouille sausage gumbo, Smith explains why she chooses to go to the Cup 'N Cork.

"I come here because I love coffee and they make awesome coffee," Smith says. "They make it as you order it. So like if you order a certain type of coffee then they'll make it from those beans. They don't have pre-made coffee.

"And I come here because Patrick and Tina, who own it, are awesome," Smith says.

Pagliai's is a popular pizza joint in Cape Girardeau. The restaurant is not crowded as it opens at 4 p.m, but there are a few tables to start the night.

Ron Bohnert, the owner of Pagliai's, says they mostly cater to the general public rather than Southeast Missouri State University students, and Saturday nights are usually busy. 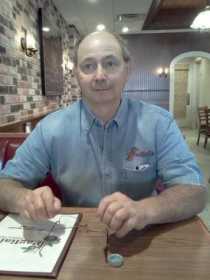 Bohnert began working at Pagliai's when it opened in 1968. He worked there throughout high school, and then in 1996 he bought Pagliai's.

"I always told myself after I stopped working at Pagliai's that I would eventually come back and buy it," Bohnert says.

Not only is Bohnert the owner of Pagliai's, he is also a pilot and owns a Piper Cub, a small aircraft.

"I've been flying since I was 25," Bohnert says. "I took classes at Cape Airport."

Bohnert says people are surprised when they find out he is a pilot.

"People are fascinated by the wall in the restaurant with all of the old artifacts and pictures of different planes," Bohnert says.

"The other night I flew to Paducah, Ky., back to Cape," Bohnert says.

Bohnert says being the owner of Pagliai's is satisfying, and if he was not the owner he would not be able to own his airplane and fly.

With their New Orleans painted murals and Cajun music, Broussard's Cajun Cuisine restaurant is known for its fried catfish and its mouth-watering crawfish, shrimp and alligator etouffees served with french bread. The restaurant sits on North Main Street, just down from Buckner Brewing Company. 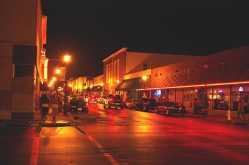 "Theres really no other Cajun restaurant in Cape like ours," waitress Destiny Tite says at 5 p.m. "It's family-oriented and not so much of a bar restaurant, but we have both sides. Like if someone wanted to come in and drink then they could, but we also have a family side. I'm not much of a seafood person, so I'm not one to ask, but our catfish is really good, and our fried gator is awesome. Our etouffees are really popular, too."