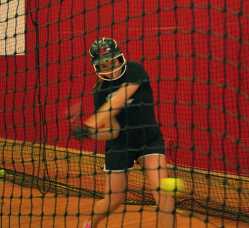 The preseason poll for the Ohio Valley Conference ranked the Southeast Missouri State University softball team fifth out of six teams in its division, but Southeast coach Lana Richmond thinks this lower ranking will not be a determinant of the team's season.

"I like preseason polls because it's other people gambling on what your team is going to do," Richmond said. "I think they can be fun. The kids look at them. I'm sure they get ticked off when they get put at the bottom -- which they were -- and it's always a challenge.

The Redhawks finished with a 25-30 record last season, including a 13-16 conference record. The team lost four position players and three pitchers.

"Well, as far as how we prepare the freshman, a lot of that preparedness takes place in the fall," Richmond said. "The fall season served as that vehicle for them as 'Welcome, you're playing with the big girls.'"

Richmond looks to seniors like Taylor Cowan, a pitcher and utility player, to be a leader for the new players. Last year, Cowan held a .343 batting average and led the team with a .470 slugging percentage.

Cowan realizes the need to be a team player and said she will play wherever the coaches tell her to play in order for the team to win.

"Since it's my senior season, the last time I'll play competitively, I want to go out with a bang," Cowan said.

Richmond said she couldn't narrow down the strengths of the team to just one area.

"It's going to be a little bit of everything working together because to be successful at our sport, you've got to play great defense, you have to have pitchers that can hit locations and throw strikes and you've got to have hitters who can deliver the timely hit and also be able to move a runner with a short game and be aggressive and take some chances," Richmond said. "And not be afraid to take risks."

"Obviously, I'm excited to see what they can do," Mata said. "Being a spring sport, it's a lot of build up. There's so much potential here and I think we'll develop it."

The coaches set other important expectations and rules for the team at the first practice.

"The very first meeting you have to sit down, you have to set the landscape of your program about your rules, regulations, meet your new teammates and everything is new," Richmond said. "There is one thing that I insist on. We talk about it in the fall -- we talk about it just about every day. Our first rule is to be a good teammate. Our second rule is to be a better teammate. It takes awhile for them to gel, to get to know each other, but that's been part of the fall [season] that you do. The most successful teams I've had have had good chemistry."

Richmond said that over her 31-season career what keeps her going is not whether her teams were successful or not, but having the ability to guide her players in learning life lessons through sports and watching them shape into mature adults as they get closer to facing the real world.

"I always said I raise other people's kids, but I do it through sport and, you know, looking back I can't remember scores of games or who did what, but I sure remember if someone graduated, if someone got the job, if someone made lifelong friends, if they learned accountability and responsibility through my demands along the way," Richmond said.

With just over a week until the first game of the season on Feb. 7 against Jackson State University, the softball team is preparing by practicing indoors and, when weather permits, outdoors. The team's first tournament, the Mardi Gras Classic, is from Feb. 8-10 in Monroe, La.

The first 24 games of the season are non-conference games and Richmond said the team will play its hardest to prepare for conference play.

"We've been very successful at the Mardi Gras playing our games," Richmond said. "That's the goal. We have 24 games and we're going to play every one of them."