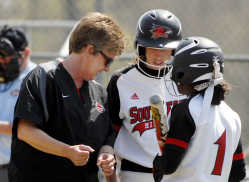 Lana Richmond will enter her 33rd season as the Southeast Missouri State University softball team's coach this spring. Richmond has the longest tenure of any current Southeast and Ohio Valley Conference coach. She ranks 14th all-time in victories for NCAA Division I softball coaches.

Southeast finished its fall exhibition games on Oct. 13 with a record of 4-4.

The Redhawks lost four consecutive games over the course of two doubleheaders against the University of Memphis and Saint Louis University but swept their last two opponents, Three Rivers Community College and Crowder Junior College.

"We've got freshman pitchers, so it all starts in the circle," Richmond said. "We're just trying to get them consistent. We're looking for consistency, especially in the strike zone."

The freshmen pitchers for Southeast are Aubrey Denno out of North Newton, Kan., and Keaira Schilling from Kirksville, Mo. They will be relied on heavily this season, and they pitched in all but four innings in fall play this season.

"They have a lot of promise," Richmond said. "We know what they can bring."

Last season the Redhawks had an overall record of 15-33 and went 6-18 against OVC opponents.

Southeast also will be counting on Anderson this season. She had an .403 batting average with a complimentary eight home runs and 26 RBIs last season. Anderson is a utility player, which means she can play any position on the field and this season she will be starting at centerfield. She was named first team All-Ohio Valley Conference and second-team All-Midwest Region last season.

"We finally told her, 'You only get one pitch,'" Richmond said.

Junior pitcher and utility player Lindsey Patterson also will also be a key to the success Southeast hopes to have this upcoming season. She started in all 48 games last season and produced a .273 batting average, eight home runs and 19 RBIs.

Patterson pitched relief in five games last season and had a record of 3-2, making her the only Southeast pitcher with an above .500 record.

According to Richmond, this team must come together to do the necessary on the field, off the field and in the classroom.

"Off the field we're in the weight room and working hard on studies to make sure everybody can be able to play in the spring," Anderson said. "On the field, I will push them to do the best that they can, and we need everybody to do it for themselves and not just to please people."