Team faces challenge of multiple people out with injuries this season 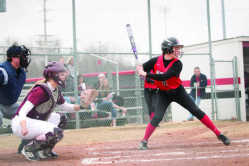 The softball team lost to Missouri State and Saint Louis on Saturday in the All-Missouri Cancer Classic. Photo by Alyssa Brewer

The Southeast Missouri State University Redhawks softball team has started its 2014 regular season with a record of 4-7 under coach Lana Richmond, who is in her 33rd season as the team's coach.

The Redhawks beat the Houston Baptist Huskies 9-7 on Feb. 14 in Monroe, La., during the Mardi Gras Classic. They were led by junior pitcher and utility player Lindsey Patterson who had three at bats and produced one home run and three RBIs.

"Well, our first trip down to Louisiana, I thought we had some strong play down there," Richmond said. "I felt like we were in both of the games that we lost. I think the big thing with the team is they never thought that they got beat. They thought they were never out of a game up until the last out. So that's one thing you can't coach is that they always felt like they were in the game."

Southeast went 3-2 in the tournament and lost to Louisiana-Monroe 6-4 and in a rematch against Houston Baptist by a score of 6-3.

The team won its last two games of the tournament in back-to-back games against the Grambling State Tigers and finished third behind UL Monroe and Eastern Illinois in the Mardi Gras Classic.

Patterson hit for .273 with eight homers and 19 RBIs last season. She also pitched in relief and had a record of 3-2 and threw a total of 24 2/3 innings and struck out 10 batters.

Patterson also started in 53 games her freshman season and had a .244 batting average with 25 runs, five home runs and 28 RBIs. She had a 2-0 record as a relief pitcher and struck out five batters.

This season at the plate Patterson has a .303 batting average and has scored five runs. She has only pitched one inning so far and allowed four hits and three runs.

Carpenter and Krack have started all nine games and have combined for five home runs, 12 runs, 27 hits and 17 RBIs.

Carpenter started in 18 games last season for Southeast and held a .288 batting average that was accompanied by 17 hits, one home run and seven RBIs. So far in 11 games she has a .500 batting average

Smith was voted to the OVC All-Newcomer team last season when she hit .235 and started 38 games.

Accompanying Smith on the OVC All-Newcomers team was transfer Anderson, who was also on the first OVC All-Conference team.

Anderson had a .403 batting average with a team-high 58 hits, eight home runs and 28 RBIs last season.

Anderson has produced a team-high seven runs so far this season accompanied with a .346 batting average, two home runs and five RBIs.

"Our biggest challenge right now is staying healthy," Richmond said. "Anderson is out with an arm, Rachel Dunkin is out with another arm. We also have two outfielders, Sarah Lindsie Heifner and Megan Touchette, out with arms. We've just got four people out right now. I think the biggest challenge right now is to stay healthy so we can put people on the field and see our different strengths and playing games to prepare us for conference season."

One of the starting pitchers for the Redhawks this season is freshman Keaira Schilling, who has pitched a total of 31 innings.

"I've never quit from not being one of the starters, but I can definitely say compared to being in high school and now I have to actually trust other people," Schilling said. "I can't do it by myself, but I really enjoy having the weight on my shoulders and being able to produce for our team."

Schilling holds the team-high for strikeouts with 25 and has a win-loss record of 1-3.

"This past weekend in Memphis, I know the competition stepped up and I felt like our hitters at the plate produced for us," Richmond said. "We've just got to get our pitching staff rolling. The two losses we had there was always a big inning where they scored the runs. Then we turned around and had a big inning against Loyola."

The Redhawks had an incredible fifth inning against the Loyola University Chicago Ramblers in the Blues City Classic tournament where they scored 10 runs to go on to win 13-3.

"You want to get as many games under your belt as possible to work through a lot of different scenarios on your defense, in your batting lineup and also it gives the freshman pitches a chance to know, 'OK, I got an awaken this weekend, something to sharpen up on, something to do, something to do different,'" Richmond said. "It just prepares them for the conference season with more Division I competition that they face."