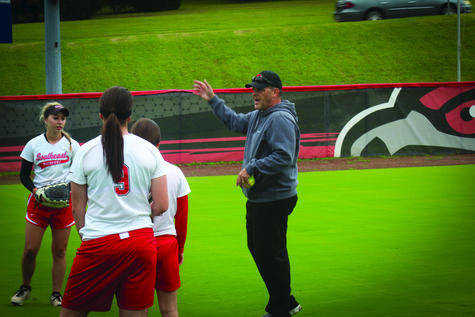 Following a record of 11-34 last season, the university decided to not renew former head coach Lana Richmond's contract after 33 years at Southeast.

Redburn's coaching resume consists of coaching and teaching for a total of six years at the high school level in the Fort Zumwalt and St. Charles districts before entering the collegiate level in which he coached for a total of 10 years.

"We want to come in and establish our foundation and what we believe, and we aren't going to cut corners. We've got to work hard and earn what we want because it's not going to be given to us," Redburn said.

Redburn's focus and overall plan for the team included overall development as a whole, create and maintain foundation and use these components as building blocks for the softball program for the future.

Shaw, a Missouri Western State University alumnus and the newly acquired infielders and batting coach for the team, has a total of 20 years of experience.

Shaw's experience consists of eight years as the head coach at Grain Valley High School from 1994 to 2002 then a tenure at Odessa High School for four years from 2010 to 2014.

During his break from high school athletics, Shaw coached baseball and softball for teams his children were involved with and teams participating in summer leagues.

"We are looking forward to helping each one of them try to reach their potential and kind of a cumlative effort of improving of the program. In addition to doing whatever I need to do to help coach Redburn and Winter and make this a smooth transition as far as a new coaching staff," Shaw said.

Winter is a native of St. Louis and played softball at the University of Michigan.

In her fifth year at Michigan, Winter was provided with her first year experience in the field of coaching as the team's student assistant.

Following graduation, Winter was an outfielders' coach at the University of Northern Iowa from 2008 to the summer of 2010 before accepting a coaching opportunity at Upper Iowa University until 2012.

After eight years of being involved with softball away from Saint Louis, Winter made the decision to pursue her master's degree at Saint Louis University, which also included assistance with infielders and outfielders during her two-year degree completion.

Winter said she is excited about drawing the attention of kids from the St. Louis area down to Southeast.

"I think there's a great pool of kids in St. Louis and in Missouri that we can use to improve our program," Winter said.

Southeast's fall season starts off with two doubleheaders. The Redhawks will play in St. Charles, Missouri, against Lindenwood-Belleville and Lindenwood University. In the following week, the Redhawks will play against Southern Illinois-Carbondale and Lakeland Community College in Carbondale, Illinois, before hosting their first home game doubleheader against Three Rivers Community College and Williams Baptist on Oct. 11.