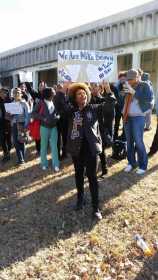 "Hey hey, ho ho, these killer cops they got to go" was the chant heard from students who participated in a protest held in front of Kent Library on Tuesday at Southeast Missouri State University.

Roughly 50 student protesters gathered Tuesday at 11 a.m. and remained in front of the library until about 1 p.m. with protesters calling for action in response to a grand jury's decision not to indict police officer Darren Wilson in the shooting death of Michael Brown in Ferguson, Missouri. The protest took a brief halt at noon to take a 4 1/2-minute moment of silence to recognize the 4 1/2 hours that Michael Brown's lifeless body remained on Canfield Drive until it was taken away in an ambulance.

Organizer Kimisha Robinson, president of Sigma Gamma Rho at Southeast, started sending out text messages and posting on social media to her fellow students Tuesday morning asking them to join her for a peaceful protest in front of Kent Library.

Robinson said she organized the protest because some students haven't had the opportunity to go back home, and she felt it was necessary for them to have their voices heard.

"It wasn't planned last night. I literally just planned this at 9 o'clock this morning, and I just wanted people to come out and be able to voice their opinions in a peaceful manner," Robinson said.

Robinson went on to say how she felt it is imperative for students to be able to have their voices heard at Southeast.

"It is important for students to get our voices out because we are the ones who will be the lawmakers and law enforcers," Robinson said. "It's good that these people are out here because it shows that they do care about their community, they care about themselves and the people around them. We want to make sure that we are sending out a message that we are not violent people and that we deserve justice."

"I had heard that this was going on, and part of my job and responsibility at the university is to make sure that people who use the free speech area get to use it for the correct purposes and that they follow the guidelines," Irby said, explaining why she was present at the protest. "I come out often regardless of what is going on in the free speech area."

Skinner said that he isn't sure how this would impact the campus but is optimistic about students using their rights to voice their opinion about an issue that is important to them.

"There is an opportunity for the campus administrators, faculty, staff and students to engage the topic, but that also presents the risk because to some people this a topic that they just assume will go away, for one reason or another," Skinner said. "As a campus, if we just pretend like it doesn't exist, we miss an opportunity to engage our students in something that 30 years from now they're going to say, 'I remember where I was at when the Mike Brown decision happened.'"

The protest, which consisted of predominately African Americans, also brought out other students of different races to join. Southeast students Brittney Cullen and Katie Smith, both Caucasian females, said that they walked past the protest and felt as if it was necessary for them to join in.

"There have been a lot of injustices happening lately and everyone deserves to have their voice heard, and we just thought adding a couple extra voices to the crowd would be helpful," Cullen said.

Smith agreed with Cullen and felt as if this was the way to have all voices heard.

Jeffrey said that she is tired of having to deal with the double standard when it relates to race relations in her community.

"I don't want the color of my skin to dictate who I am and what I am able to do in life, I want it to be my work ethic. But it seems like no matter how hard we strive at the end of the day it's still my color that dictates who I am and how I operate," Jeffrey said emotionally. "When I get angry, somehow I speak for the entire black race, but when a white man takes someone's life it's 'Oh he was protecting himself.' It confuses me how all of us individually speak for all black people, but that one police officer doesn't speak for all police officers."

Many protesters in the crowd said that they don't wish any hurt or danger against Wilson, the police officer who shot and killed Michael Brown, but feel as if he should at least be held accountable for his actions.

"We are ... Mike Brown" was a chant that was heard many times throughout the protest, and Robinson said that the chant resonates with her because any one of the protesters could be next.

"I am Mike Brown, I could've been laying dead in the street for 4 1/2 hours. These people, my little brother and all of us are Mike Brown because in a sense we face the same dangers that he faced that day," Robinson said.

She went on to say that she plans to continuously protest as much as Southeast students would like to.

"Absolutely, I will continue these protests as if everyone would like to, and if they don't I will do it myself," Robinson said. "Regardless if it's out here publicly, in my classroom or at my job, I will make sure that our voice is heard and that it is done peacefully as we've been doing."