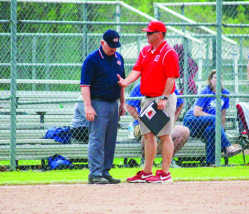 First-year Southeast Missouri State softball coach Mark Redburn has a discussion with an official during game two of the doubleheader on Saturday. Photo by Doc Fiandaca

When a coach hits a milestone usually they are aware of it, but when Southeast Missouri State softball coach Mark Redburn won his 100th game as a head coach on April 8, he knew nothing about it.

"I didn't even know I had won 100 games in a career," Redburn said. "It wasn't until after the game that my assistant coach shook my hand and said 'Congratulations' that I thought it was a little strange, and then she said I just won my 100th game. That was the first I knew about it."

Redburn knows it's still an accomplishment to be proud of and was happy to hit the milestone.

"I'm very happy that it happened here at this university and with this team," Redburn said.

Redburn has had some success in his stints as a head coach when he took the Jefferson College softball program in Hillsboro, Missouri, in its first year of existence to a 49-16 record and a ninth-place finish in the NJCAA Division I National tournament.

He was an assistant coach at the University of Missouri for three seasons, and one year included a trip to the College World Series. He worked with the pitchers and catchers while at Mizzou.

He got his chance at the Division I level at Evansville, a member of the Missouri Valley Conference, where he went 90-175 over the past five seasons.

Redburn was named Southeast's head coach in July and has compiled an 11-22 record in his first season, tying last season's total of 11 wins. The team has already eclipsed the Ohio Valley Conference win total of three from 2014 with a 6-11 record this season. He has also tried to implement his teachings and philosophy, Redburn said the team has been receptive.

"The girls have been really positive in trying to learn our new styles and trying to get better," Redburn said. "They really get along with each other, and that's something we stress as part of our core values. This is a team that is eager to learn and wants to be successful."

Redburn said that he has no philosophy set in stone and that he tries to match his style with the type of personnel he has on the team.

"We try to make what we do the same and on a consistent basis, but you do have to adjust it slightly based on the players you have and injuries and that sort of thing," Redburn said. "But my philosophy is much like that of a baseball mindset. We talk about getting the leadoff hitter on, and trying to move runners and get them in. So it's very similar to baseball."

Being a new head coach and bringing in a new set of assistant coaches like Kerry Shaw, players can have a hard time adjusting to the new rules and mindset, but the Redhawks have adjusted on the fly.

Redburn said they are getting used to how he manages, but it's still a work in progress.

"I think the team has done a great job, and it's not easy," Redburn said. "When you come in as a new staff, the players are just trying to learn the ins and outs of how we are, and how we want them to play the game. But there is still certainly room to improve."

Even though senior Lindsey Patterson has to adjust to a new head coach as an upperclassman, Patterson said Redburn keeps a positive attitude and makes things fun while still keeping the team focused on the task at hand.

Patterson said she has learned a lot about softball in the short time Redburn has been coach.

"I learned about many aspects about the game that we really haven't been taught before, like different approaches and other situational things that we could be doing to help the team," Patterson said.

Patterson used this newfound knowledge and has hit five homeruns and drove in 22 runs this season, better than the three homeruns and 15 RBIs from last season.

The Redhawks have lost seven games by one run, and moving forward Redburn says he wants to win close games in the future.

"We know we are right there and want to keep going and plugging away, competing hard until the end of the year and [eventually] good things will happen," Redburn said.