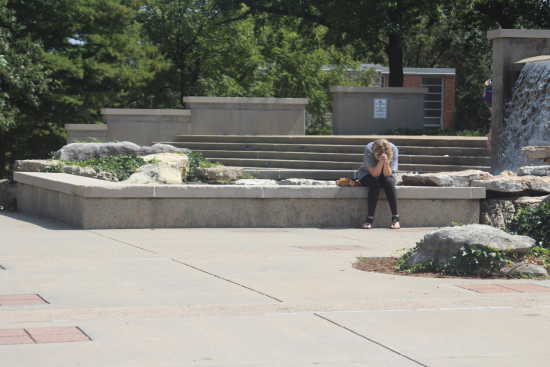 A volunteer actress from the Violence Prevention Program plays the role of a distressed student.
Photo by Kara Hartnett

Step up September is underway with the Campus Violence Prevention Program at Southeast Missouri State University.

“Step UP!” is a bystander intervention program that has been used at Southeast for several years and is known across the nation as a program that educates students to be proactive in helping others.

“Research shows that bystander intervention is the most effective violence prevention method,” Donna St. Sauver, the coordinator for CVPP, said.

In order to promote bystander intervention at Southeast, St. Sauver and the rest of her team are going to create scenarios with actors that simulate a student in need to see if anyone steps up to help.

Each scene will be secretly filmed until someone stops to assist the actor in need. At that point, people will come out of hiding with a prize and celebrate the good deed.

Students who step up could receive anything from a $5 gift certificate to any Chartwells location to a Southeast water bottle or various other prizes.

Students can look around campus for someone who looks depressed, drunk or in any other vulnerable state.

St. Sauver also wants to cover topics like homophobia by having her actors act out a scene where someone is bullying a gay couple to see if any student will get involved.

The bystander effect occurs when there are people around and individuals are discouraged from stepping up in an emergency situation. This was tested through the bystander apathy experiment, where a group of subjects all had headsets and microphones and one started to have a fatal seizure. Only 31 percent of the subjects tried to seek help. However, in a one-on-one environment, 85 percent of the subjects sought out help.

“Here at the university, we can be the first person to step up,” St. Sauver said.

Once the simulations at Southeast are complete, the results will be made into a video. St. Sauver hopes the video will not only encourage students to become active bystanders, but also that it will give students in need the message that they are not alone and there are people at Southeast who care and have resources to help.

The first scenario was played out Friday and involved an actress playing the role of a student in distress by the Kent Library fountain. Within four and a half minutes, Matthew Kauzlarich was the first Southeast student to step up.

“I just wanted to see if I could help her out,” said Kauzlarich. “I didn’t know if it was school related or her boyfriend.” 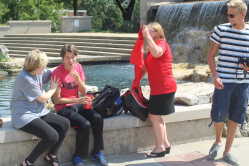 Student, Matthew Kauzlarich, receives his "Step Up Swag" after stopping to help an actress playing the role of a girl in distress.
Photo by Kara Hartnett

Kauzlarich said he mostly stays to himself, but when he saw her upset he couldn’t help but see what was going on.

Once he seemed invested in helping, St. Sauver came out to surprise him with his prize. The entire scene was filmed in order to add to the video.

“I want this video to remind Southeast students that we are a community, that we do step up and take care of each other and that there is benefit to that,” St. Sauver said. “So often in our time we look at the events around us and think, ‘that is none of my business’, and that is why terrible things happen.”

Throughout the month of September there will be three more of these occurrences with unknown dates and locations.