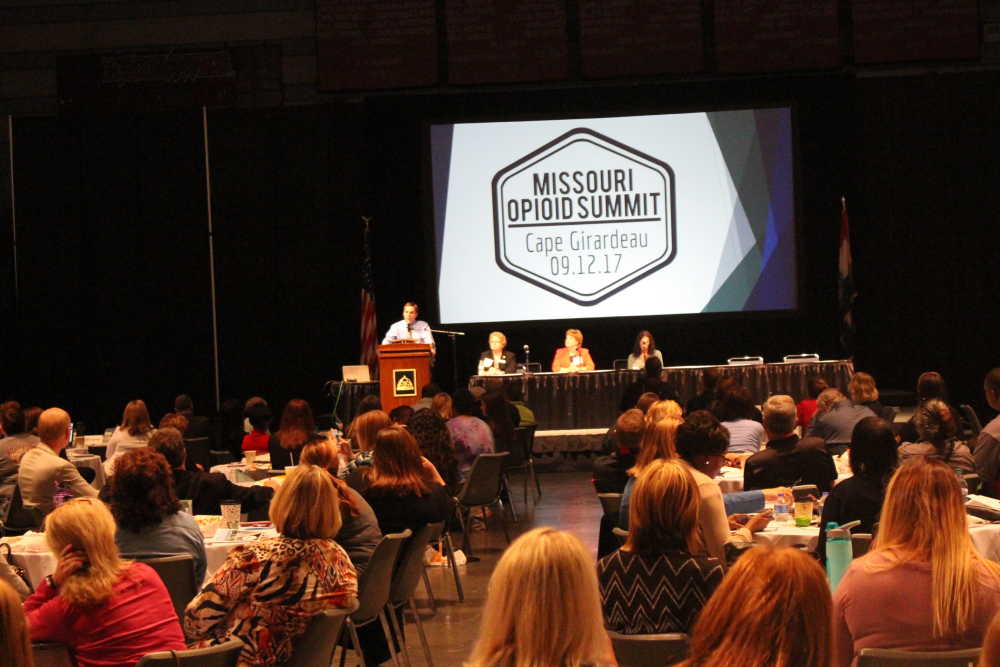 The second annual conference brought more than 400 registrants to the Show Me Center to discuss issues surrounding the heroin and fentanyl crisis and the abuse of prescription drugs.

Dr. Randall Williams, director of the Missouri Department of Health and Senior Services, said the opioid crisis affects 1 in every 4 families in the state.

“People will continue to die unless we intervene,” Williams said.

Dr. Rachel Winograd of the Missouri Institute of Mental Health at University of Missouri-St. Louis said St. Louis recorded the sixth highest overdose rate in the United States last year, bringing the average in Missouri to more than two overdose deaths a day.

Winograd said fentanyl, heroin and prescription drugs are responsible, in that order.

“People are seeking treatment because they are afraid of fentanyl laced in their heroin, our morgues are overwhelmed with bodies and there is death daily in the streets,” Winograd said.

Winograd said of managing the opioid crisis we need to do things differently than we have in the past, sustaining policies that benefit users and addicts on the road to recovery, and concentrate foremost on keeping people alive.

Larry J Reavis Jr. of the U. S. Department of Justice addressed the summit next. He is the Assistant Special Agent in Charge of the Drug Enforcement Agency.

“With 64,000 overdose deaths in 2016, it’s time to stop looking at addicts as statistics and start thinking of them as members of the community,” said Reavis. “The DEA perspective is that there is a demand problem in Missouri,” Reavis said. “Drugs like methamphetamine are readily available and the presence of fentanyl has increased 300 percent.”

The DEA special agent said a majority of these drugs come into the U.S. via cartel activity through the Southwest border.

He also referenced a May 2017 Cape Girardeau search warrant that revealed more than 30,000 various packaged drugs including heroin, fentanyl, MDMA, cocaine, methamphetamine and others. The suspect (now incarcerated) was a local business owner who had been using the dark web and the U.S. postal service to sell and distribute drugs, which he pressed and packaged.

Reavis said he expects Missouri to say ‘enough is enough’ and move to the forefront of efforts to combat the epidemic.

The speakers and panel discussions that followed advocated for greater emphasis on universal prevention, and helping young people to manage risk factors with early intervention and education.

In regard to breaking down the fear and misunderstanding associated with seeking treatment, Howard Weissman said “how can we afford not to.” He’s the executive director of the National Council on Alcoholism and Drug Abuse-St. Louis and closed out the summits lectures.

To learn more about the current state of the opioid epidemic in Missouri and Cape Girardeau visit the Missouri Department of Mental Health’s website dmh.mo.gov or contact Cape Girardeau County Public Health Center.