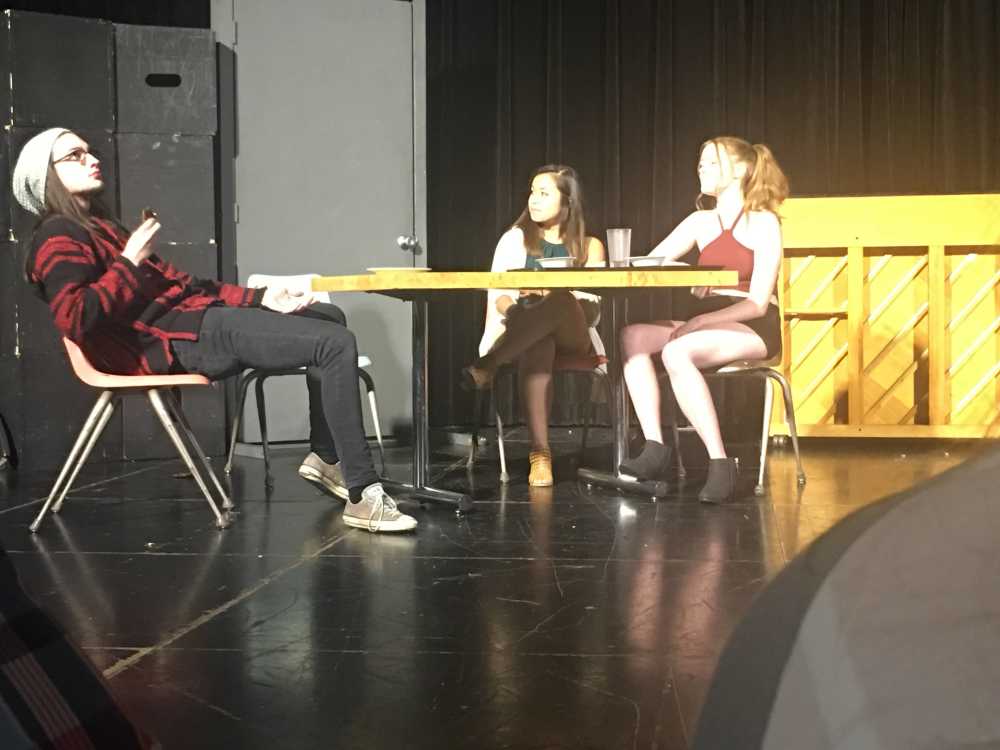 Van, Tricia and Marcie are having lunch discussing the issues with C.B., Beethoven and Matt.
Photo by Hailey Hampton.

Friday night, those who attended the performance by the student workshop production of “Dog Sees God: Confessions of a Teenage Blockhead” experienced the dark teenage lives of Charles Shulz’s Peanuts characters.

“Dog Sees God: Confessions of a Teenage Blockhead” by Bart V. Royal is a show that addresses bullying, homophobia and suicide and portrays Peanuts kids as teenagers.

This production was set in a smaller show space, as the audience sat only inches from the actors. This created a more intimate setting. Throughout the show, C.B. deals with his dog dying, questions about death and encountering his first homosexual experience with Beethoven. Beethoven was bullied for being gay throughout the play.

This bullying worsened once C.B. kissed Beethoven in front of all of C.B.’s friends. The show ended with C.B. reading a letter from his pen pal and Beethoven appearing beside him with the suicide hotline number written on his arm.

Southeast sophomore and director Katrina Yeager chose this show because it hits her close to home.

“I personally dealt with some battles with suicide and my friends’ sexuality,” she said. She mentioned the timing of the show was appropriate because September is Suicide Prevention month. .

“The show was a task, but it was the most fun I’ve ever had,” Shea said. “I love theater because it makes me who I am and it definitely brings people together, especially in shows like this.”

“We had three weeks to put on this show,” he said. “I loved it though because we discussed topics in this show that people tend to look away from.”

“I really grew as an actor through this, as I am typically the comic relief,” Hatchell said. “That was probably one of my favorite parts of doing this show.”

Southeast freshman Jackson Bradshaw attended the show and only had positive things to say.

“I really wanted to just come and support my friends,” Bradshaw said. “I left amazed by their performance.”

“It was really interesting to see how the crowd reacted to the topics of this show. People laughed and cried, and I think that says something about the performance,” Bradshaw said.

Southeast freshman Neely Caudle was in the audience Friday night because this show is one of her favorites.

“I thought this production was really great,” Caudle said. “The artistic interpretation was different than I have seen. Five stars.”

The purpose of this show was to raise awareness to issues related to suicide, and using these characters helped strike a chord, as the show and cartoon were both parts of the major production during the childhood of these students.

In keeping with the topic of the play, there was a donation box for The American Foundation for Suicide Prevention.