When Lt. Col Anthony Anderson enrolled in the ROTC program at Oklahoma State University and eventually earned a bachelor's degree in aerospace science, he began a journey dedicated to military service.

For Anderson, military service runs deep in the family. His father and grandfather both served, and their commitment became the driving force for him to join the ROTC 21 years ago.

“This is near and dear to my heart,” Anderson said.

Now, Anderson comes full circle and joins Southeast as the new Air Force ROTC Detachment 205 Commander, an honor for a man who has devoted his entire career to ROTC. 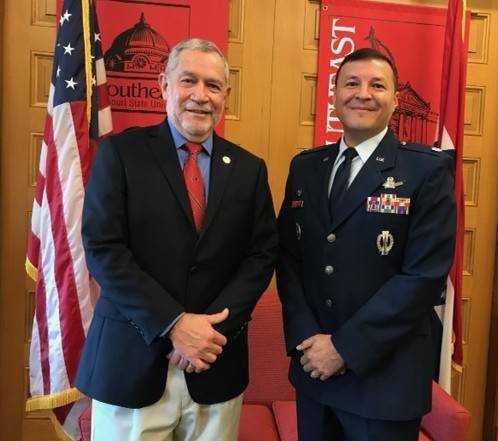 Anderson left his position as Space Operations Branch Chief in the Space and Mission Defense Division at United States Strategic Command at Offutt Air Force base in Nebraska to lead the Air Force ROTC Detachment 205 based at Southern Illinois University at Carbondale and serve as a professor of aerospace studies. Although Anderson is based in Carbondale, he travels to Cape Girardeau to teach courses and lead cadets at Southeast.

Anderson said he is overwhelmed by the support and hospitality he has received in the community. He said while in uniform in public, strangers have approached him to thank him for his service.

“People are so supportive,” Anderson said. “It makes me feel renewed as to what I do every day.”

As commander, Anderson leads the Southeast Air Force ROTC program and develops future military officers. Military leadership has changed over the years, he said. For example, the public once viewed the military as having a strictly war-fighting mentality, but that has changed, he said.

“Nowadays, a lot of wars are fought in the cyber realm,” Anderson said. “The first two years is just getting to know what the Air Force is all about and what it means to serve in the military.”

The Southeast Air Force ROTC looks for potential cadets to have technical, satellite and communication skills, he said. ROTC cadets work through a normal university schedule and are under no obligation in the first two years. In those two years, cadets will learn history and evolution of airpower, military history, basic maneuvers, commands, marching, how to wear a uniform, fitness and more.

Although there are programs and scholarships to help cadets, Anderson said it's challenging to take on university studies as well as ROTC courses.

“This is something deep down inside them that they want to pursue,” he said.

When considering the workload and dedication it takes to be a cadet, Lt. Col Anderson has some advice.

“Do your best all the time,” he said. “Believe in yourself, you can do it. The only difference in impossible and possible is the I M and that’s you.”

Students interested in the Southeast Air Force ROTC program and would like to find more information can visit http://www.semo.edu/air-force-rotc/.