Head coach Rick Ray said he was pleased with the outcome of the game but was not pleased with how Southeast played defensively. 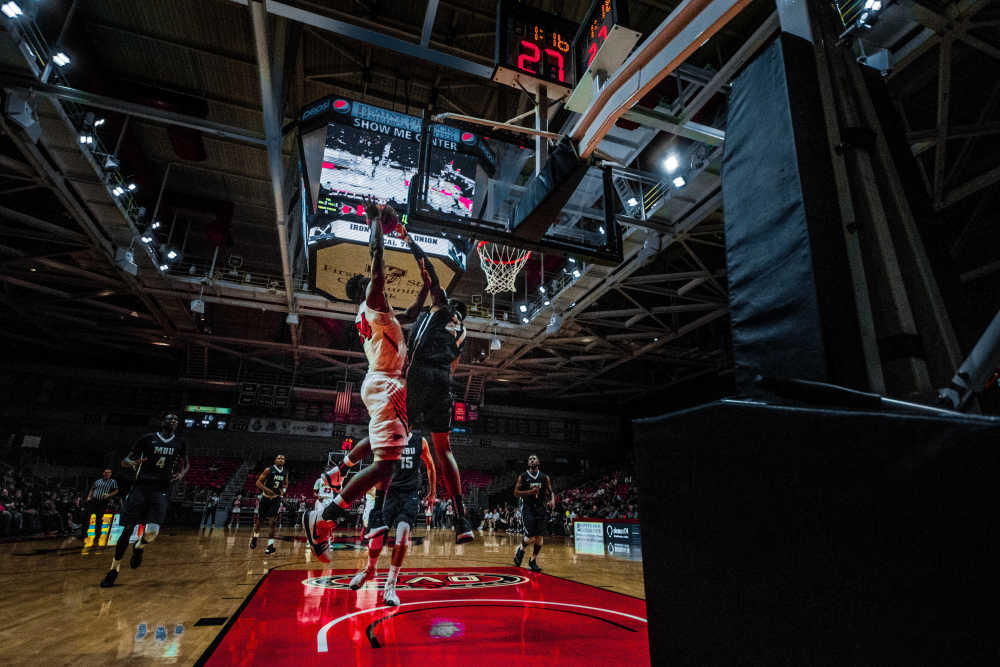 Sophomore guard Denzel Mahoney goes up for a shot during the Nov. 10 game against Missouri Baptist.
Photo by Shane Burke

“We got some guys that can do some really good things on the offensive end,” Ray said. “We just gotta continue to share the basketball and move the ball. We’re not really good when we try to make one-on-one plays when I think we’re really good when that ball is popping and moving.”

In the first half, the Redhawks started off slowly as Missouri Baptist went on an 8-0 run before Southeast could score their first points.

By halftime, Southeast was out in front 37-27 with sophomore guard Denzel Mahoney leading the team with 12 points and playing a total of 14 minutes.

To start off the first half, Southeast went on a 9-2 run, capped off by a slam dunk by junior guard Mark Laros, which brought a lot of energy to both the team and the fans.

“I thought that we needed it,” Ray said. “I said this game, ‘You guys have to come out and give us a burst here in the second half.’”

After the game, Ray told his team the game came down to who made their free throws. From the free throw line, Southeast went 19-21 and Missouri Baptist only went 13-23.

Offensively, Brewer played 26 minutes, scoring 14 points and recording five rebounds. Ray said he has the potential to be a shot maker.

“He’s not just a guy that can make shots from the perimeter and make threes,” Ray said. “He’s a guy that can create offense. He’s a very talented guy. I think he’s a guy that can down the line be an All-OVC performer. We got to continue to help him with his game because he’s got that talent.”

“The problem we have right now is with Dondre [Duffus] being out,” Ray said. “He’s really the only guy that’s a point guard. Dondre is not a point guard, he’s more of a shooting guard.”

“I thought he did a great job. Any time you don’t turn the basketball over regardless of how many assists you have, you’ve had a good game as a point guard,” Ray said.

Dalton said he took responsibility for not giving the ball more to the 6-foot-10-inch Laros, who only had five shots all game.

“For as hard as he played he should have had more than five attempts,” Dalton said.

Mahoney finished the game playing 32 minutes, leading the team with 21 points and making all 11 of his free throws. Ray said with Mahoney being one of the only returning players with success, he needs to come out hard to give the team a chance to win.

“What I liked is that he got to the free throw line, so he was being aggressive,” Ray said.

Southeast’s next game will be on the road at 6:30 p.m. Nov. 13 facing Louisiana Tech in the Cancun Challenge. The next home game will be at 2 p.m. Nov. 26 against North Carolina Central.