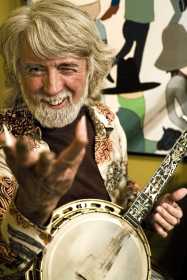 Solo artist, producer and founding member of the Nitty Gritty Dirt Band, John McEuen has thrived in the music industry for more than half a century. But to hear him tell it, he has only just entered his prime.

McEuen and the String Wizards will take the stage at Bedell Performance Hall at the River Campus Jan. 27 at 7:30 p.m. after a series of shows across the Midwest.

McEuen said it will be a privilege to play a music hall like Bedell and that he plans to have the best performance of his life, because any show could be his last one.

"I've played the flatbed trucks, I've stood in the mud and been snowed on and rained on while I'm playing," he said. "I've played county fairs where the swine pavilion was the most powerful thing that you could smell. I've played shows where you didn't know why you were there. So I can't wait to get to that fine theater in Cape Girardeau."

Joining them for the show in Cape Girardeau is a man who McEuen credits for getting him interested in bluegrass music: Rodney Dillard of Salem, Missouri.

"I saw him when I was 17 years old. [The Dillards] introduced me to that whole life through their music," McEuen said. "I don't think there would have been a "Will the Circle be Unbroken" without the Dillards. The Nitty Gritty Dirt Band might not have existed or it wouldn't have had a banjo player in it."

Rolling Stone called Nitty Gritty Dirt Band's 1971 album "Will the Circle be Unbroken" "one of the most important recordings ever come out of Nashville." McEuen called it the "Dark Side of the Moon" of country music.

McEuen initiated that album by recruiting Earl Scruggs, Doc Watson and other masters of Americana to record with the young group. He said the music he and the String Wizards play now is reminiscent of that early Dirt Band sound.

They Are Definitely Not Gymnasts Anymore

"It has that jam band feel, the traditional feel, the musicians pushing themselves to new territory feel, and not just a rendering of 18 songs," McEuen said. "We look forward to it as much as the audience does. We spend a lot of time on the music but it only has value if you get to go do it for other people."

The show will feature a multimedia aspect that takes audiences on a journey through time, from the beginning of the Dirt Band, when the members began rehearsing in the parking lot of a Southern California music store in 1966.

"It's like taking the people to the session," he said. "People tell me 'I felt like I was there,' and it means a lot to them because it's an explanation of what went on."

Following that collection of footage, he said the performance will kick off their own "menu" of music, featuring songs from McEuen's latest solo album "Made in Brooklyn."

He said the album was recorded in just two days at a Brooklyn church with one microphone. It highlights the talents of guest artists like lifelong friend Steve Martin and John Carter Cash, the son of Johnny and June.

"It's the best sounding record I've ever been on," he said. "It just sounds different. You feel like you're in the living room with the people playing around you."

The 14 songs on "Made in Brooklyn," McEuen said are things that he has been collecting over the years, ranging from folk instrumentals and jazz tracks to a hippie-country-rock song written by Bernie Leadon, a founding member of the Eagles.

"Each song has its own special quality, each one has a reason to be there," he said.

The music released after McEuen's exodus from the Dirt Band, the artist said played a big role in his departure.

"After 50 years of being involved with Nitty Gritty Dirt Band, I realized they never supported any of my music other than one song," he said. "For many years I was told, you can't put any of those [instrumentals] on the albums any more. Just a combination of a struggle that shouldn't have been there."

Having branched out on his own though, McEuen said he can concentrate more on his own business: recording music, constructing film scores for the likes of Tommy Lee Jones, and producing albums like Steve Martin's "The Crow" which won a Grammy for Best Bluegrass Album.

McEuen has toured extensively in the last 50 years, playing more than 8,500 shows. The Nitty Gritty Dirt Band became the first U.S. band to tour in Soviet Russia in the late 70's, where McEuen said he taught American slang to fans. His solo career has brought him alongside countless stars like Dolly Parton, Sammy Hagar and Jerry Garcia.

"I learned from the drug people to not do drugs, because they never played better high but they thought they did. And they also weren't as nice as they were prior to getting loaded."

He said it was interesting to be that close to so many incredibly gifted talents.

"I was 5 feet from Eddie Van Halen the night he joined up again with Sammy Hagar. It looked like the smoke was coming off of his body as he was burning up that guitar in front of 80,000 people doing the hammering thing and had total control. It was like something was coming from the sky and channeling through him because I don't think a human can do that. And years later I watched him melt down from that same problem."

Still, the artist said, he has given no thought to slowing down.

"It's getting better all the time. I think I'm the best me I've ever been. I can't wait to get out there; it's just getting started. These are the prime years," he said. "And it's a responsibility; if I can do this, I must."