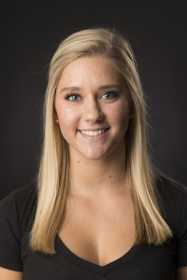 Freshman Lindsey Bates was named Midwest Independent Conference (MIC) Newcomer of the Week on Wednesday, Jan. 17 following her first two career all-around title against Illinois State (38.950 on Jan. 12) and Lindenwood (38.250 on Jan. 15). This marks her first career MIC honor. She also won the beam (9.800) title on Monday, January 15 against Lindenwood.

“It feels really good, I didn’t I expect it,” Bates said. “It is good to see that my hard work during preseason has been paying off. I did not expect to accomplish this much in just three meets.”

Bates has had weekly improvements, during the season opener at Kentucky she scored 9.650 on vault, 8.750 on bars, 9.575 on beam and 9.675 on floor resulting in an all around score of 37.650. That landed Bates in a sixth place spot in her first collegiate meet. A week later, at the season home opener against Illinois State Bates earned an all around score of 38.950 which is her personal best.

“Her weekly improvement is awesome and just a breath of fresh air to be able to see where she came from starting in the fall, where she is now, and where she could potentially be in the future,” Head Coach Brittney Emmons said. “Keeping her focus and keeping the teams focus is the main goal right now.”

Bates is currently competing as the only all-around gymnast, Emmons explains how she made that decision.

“It comes from her hard work and dedication to the sport to know that she puts in the work day in and day out on each event and she proves herself is important,” Emmons said. “She just goes up there and does her gymnastics very solid. Right now that is what this team needs, just to get up there and do our job and just be able to hit our events and rock it each and every time.”

Bates has tied with senior gymnast Alexis Brawner in a couple events so far, being only a freshman that is impressive. Bates said she really does not care to compare scores with her fellow teammates. Individual scores are not as important as the overall team score. Winning meets together is all that matters.

Bates is the beam queen. Against three- time MIC champions Lindenwood, she scored a solid 9.800. Bates said she does get nervous, but she is learning to channel her emotions with the support of her teammates and coach.

“Just getting on the beam or whatever event it is and knowing that you can do it and that you can hit it is most important,” Bates said. “Brittney reminds that it is not about how the warm up goes, it makes me feel better knowing that I have hit it before in practice so I know I can hit it in a meet too. If I get too nervous the team is really good at pulling me out of my dark hole and making me feel good about what I am doing.”

The Redhawks are traveling to Philadelphia, Pennsylvania for their first meeting against the Pennsylvania Quakers on Friday, Jan. 6, at 6 p.m. and then Sunday, Jan. 28, at 11 a.m. They compete in a quad meet against Temple Owls, Ithaca Bombers and Cornell Big Red. Southeast returns home to face off Western Michigan at Houck Field House on Friday, Feb. 2, at 6:30 p.m.