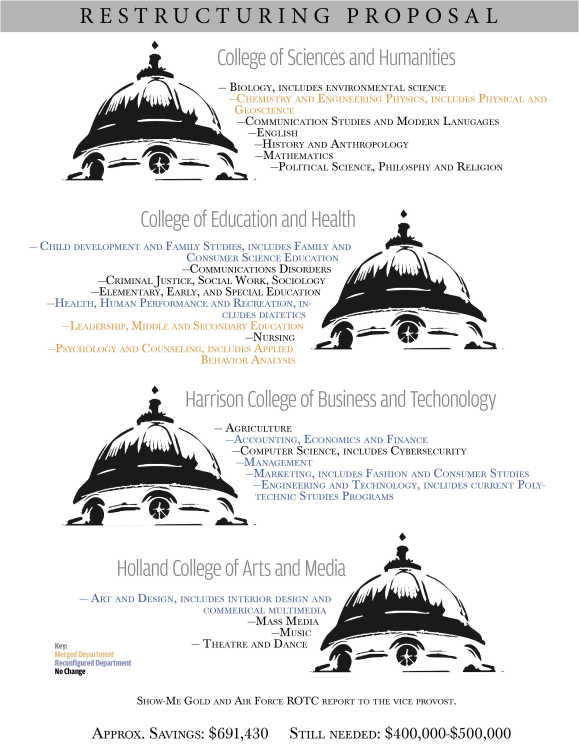 Provost Karl Kunkel submitted a major academic-restructuring proposal Friday afternoon to compensate for state budgets cuts made in July that reduced base funding for the academic affairs sector of the university by nearly $1.2 million.

The restructuring proposal would reduce five colleges and one school into four colleges, eliminate six positions and two administrative stipends, and would reduce annual operating costs by $691,430.

A single comprehensive proposal was submitted for consideration with several different college and departmental changes in order to give a broad idea of all changes needed to occur. Each department, Kunkel said, will have the opportunity to respond to their own piece of it to propose any alterations before being sent to the board of regents.

“The whole process is advisory to the president. Ultimately the president and I will look at feedback and figure out if the proposal is, as it currently is, should go to the board or if it should be tweaked in certain ways,” Kunkel said.

Out of the positions being reduced, several employees may have the opportunity to remain employed at Southeast through relocation or due to their tenured faculty status. Kunkel said, however, that the university is cutting jobs as a way to save money.

Department chairs are faculty and receive a stipend for their positions, so if they are displaced due to the mergers, they have the opportunity to return as general faculty, according to Kunkel.

“I don’t believe people are actually losing their jobs; they will have a job, just not the same job,” Kunkel said.

Deans also have faculty status, and therefore have tenure in their given home departments and also will have an opportunity to return as general faculty members.

Administrative assistants, however, will have to compete for vacant positions in different departments.

Kunkel said qualified inidviduals will get automatic interviews for positions open on campus, and believes their experience at the university will make them attractive candidates.

The workload for remaining administrators will increase as departments and colleges merge together, and Kunkel said it later will be determined whether or not they will receive more compensation.

The biggest change in the proposal is the reduction and restructuring of the colleges at Southeast. The four new colleges will include: College of Sciences and Humanities, College of Education and Health, Harrison College of Business and Technology, and the Holland College of Arts and Media.

River Campus programs, formerly ranked as the Holland School of Visual and Performing Arts, have been upgraded into a college with the mass media department and a merged art and design department. Kunkel believes that the change into a college will better represent the caliber of the program at Southeast and elevate the departments even further.

“Part of what we are trying to do within this process is strengthen the university moving forward,” Kunkel said. “To not just cut, but also reorganize things so that when this budget cycle is over, we are in a position to be a stronger university and to enhance our programs that are high-profile programs.”

Kunkel said with the steady increase in River Campus enrollment and recruitment each year, it only made sense to elevate the program to a more prestigious title.

Even with the restructuring proposal, Academic Affairs still will have to identify $400,000 to $500,000 to cut out to meet the new budget.

Throughout the past fiscal year, academic affairs was able to identify money through cuts that were made early on, as well as using “one-time money” from a savings that accumulated over the years.

After the restructuring is taken care of, Kunkel will have to look into other methods academic affairs does to address the rest of the money needed to cut.

“What I was wanting to do with this is get the restructuring part done moving, and then take the others as phase two as the process,” Kunkel said.

He said that process will come sometime between now and the end of the fiscal year.

To create the proposal, Kunkel began collaboration with faculty in mid-October. He set up a special email specifically for comments and feedback that received 80 messages. In addition, Kunkel said there were approximately 100 meetings that occurred in relation to this proposal.