The cast of 'Cinderella' takes a bow after their performance, Jan. 19.
Photo by Linda Barnes Davis

When the curtains opened at Bedell Hall for the River Campus’ first production of the spring semester, the audience was greeted with a familiar scene: Cinderella scrubbing the floors earnestly. The performance that followed though was charmingly removed from Disney’s version of the timeless fairy tale.

Southeast departments of music and theater and dance have combined their efforts to deliver Pauline Viardot’s classic opera “Cinderella” —or “Cindrillon”— with two performances Jan. 19 and 21. 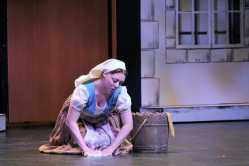 Cinderella, portrayed by Brittany Moleski, scrubs the floor during the opening act of 'Cinderella'
Photo by Linda Barnes Davis

Originally composed in French, the majority of songs in the opera have been translated to English, but director Christopher Goeke said the French words and accents used heavily by the performers conveyed the essence of 17th- century France. 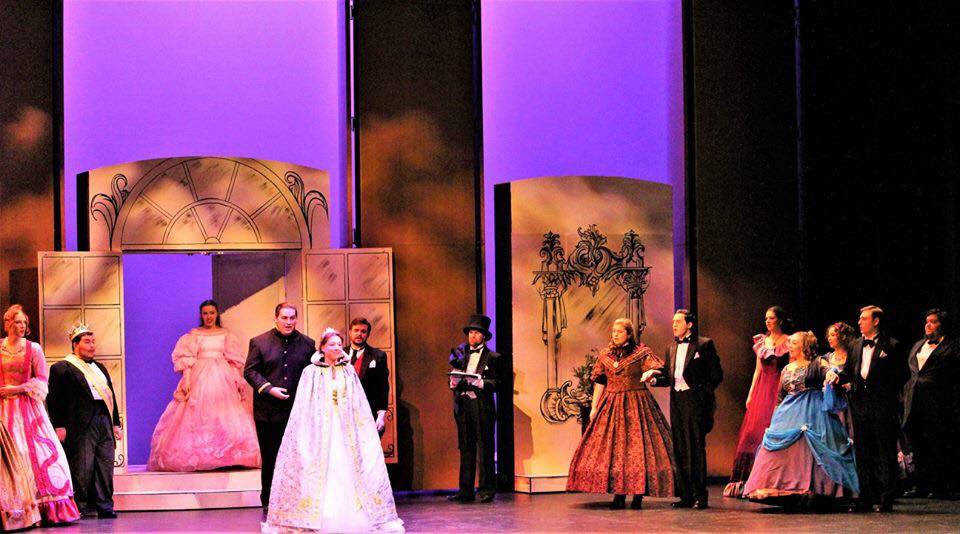 Cinderella arrives at the ball.
Photo by Linda Barnes Davis

Goeke said Viardot composed the classic opera in 1904 at the age of 83.

“She had an international career as a singer, retired and started teaching, and she would write music for her students to perform,” Goeke said. “She would write music that fit what the students needed, if a student needed a particular style or needed to be challenged in a certain way. So it makes a great piece for us; it’s challenging but doable.” 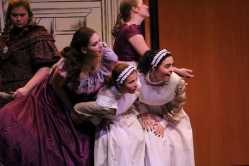 Goeke said “Cindrillon” generally is accompanied by piano, but this presentation relied on Southeast’s orchestra, led by Timothy Schmidt, for an impressive and interactive score.

Musical theatre major Nicholas Ducote, who played Cinderella’s prince, said the River Campus production offered something new, even for those familiar with the story. 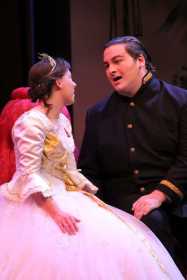 The glowing wand of La Fée (the Fairy Godmother), played by Southeast senior Kylie Toerpe (Friday) and Abigail Becker (Sunday), brought a bit of magic to the show. She said multimedia elements, such as video and some pyrotechnics, helped facilitate the illusions on stage.

Toerpe said the student performers involved in the production returned to campus a week early to tighten down the performance. She said there was very little room for unpreparedness.

“We have wonderful professors and people that we work with and because we drill it so intensely in the months before we come back it’s always pretty solid,” Toerpe said.

Cinderella’s evil stepsisters, portrayed by Zaria Christopher and Julia Diaz (Friday) and Bailey Schnurbusch and Emily Davis (Sunday) were one key source of the opera’s lighthearted tone, epitomized by a ballroom scene Goeke said felt as fun for the performers as it was for the audience.

Goeke said there is generally an opera every year, which differentiates Southeast from other undergraduate universities.

“It’s our students singing all the leading roles, and this is something usually you’d see professionals doing, and now our students have the opportunity to do it,” he said. “When I go watch students play football or basketball or play in the band I’m really impressed by all their talent, and I think the same thing holds true for this. These students are so talented; they’re having a lot of fun telling the story.”

Goeke said open auditions during the fall semester allowed students from all academic departments to audition for the production, even if they were not fine arts majors.

“It means so much to us to work so hard and then perform it for you all,” Goeke said. “Just say ‘yes’ to opera.”