The student-regent position on the Board of Regents at Southeast has been vacant since Jan. 2017, and is currently awaiting appointment by Gov. Eric Greitens.

The search for a new student regent has been in process since Aug. 2017, and has come down to three finalists: junior Kaetlin Lamberson, senior Tramea McCrary and junior Luke LeGrand.

The student regent is one of seven positions on the board of regents, and although it is the only non-voting member, it plays a key role in representing the voice of the students. 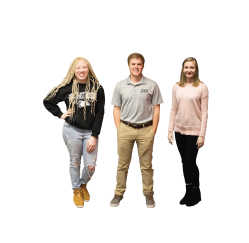 “Our expectations for them is that they engage in dialogue at board meetings, that they ask questions and come prepared,that they attend all meetings, but most importantly, that they truly bring forth the voice and opinions of their peers.” Chris Martin, chief of staff, assistant to the president for Strategy & Gov. Relations and secretary to the board of regents said.

Martin said it is of the utmost importance to the board that the student regent works together with other students on campus. He or she should keep students informed and updated on issues, as well as relay their interests, concerns and comments back to the board.

In the absence of a student regent on the board, Martin said a slot on the meeting agenda is reserved for a Student Government Association representatives to come speak, and is pertinent to the necessity of student feedback.

“Those conversations are very impactful to let the board know what the current pulse is of students across campus,” Martin said.

University president Carlos Vargas also introduced a section on the board agenda where individual students are invited to give a presentation on their experience at Southeast. Martin said it is not uncommon for those conversations to turn into consistent feedback for the board of regents.

In Dec. 2016, Bradley Jones was appointed student regent by Gov. Jay Nixon. His appointment was known as a “recess appointment,” because the Missouri Senate was not is session at that time. The Missouri constitution states that if a recess appointment is not confirmed by the Senate within 30 days, then the individual being appointed is barred from serving on the board for life, according to Martin.

“To preserve his ability to serve, Gov. Greitens actually withdrew Brad’s appointment on Jan. 31, 2017,” Martin said. “That preserved his appointment to be renominated, re-interviewed and reconsidered if that was so deemed by the governor.”

Before the appointment of Jones, the position was open for approximately nine to 11 months.

“It's one of hundreds or thousands of board spots that the governor's office is having to fill, so while they try to work through them with diligence, the unfortunate reality is that sometimes there is that lull,” Martin said.

Several other universities around Missouri are also facing vacant trustee, board-member and student-regent positions. All are undergoing a similar process to get appointments from the governor's office.

Martin said he is hopeful the positions will be filled soon, however he does not know an exact date.

Southeast junior Kaetlin Lamberson applied for the student regent position because she wants to help broaden a constituent group at Southeast.

A dance major from Poplar Bluff, Lamberson hopes to better freshman integration at the university, better school-provided privileges such as counseling and disability services and similar offices, and create more alumni involvement to better student’s academic and post-graduation experience.

She wants to work heavily with SGA and other students on campus to create a collective voice on various events happening at Southeast in order to effectively report back to the board. She said her former ties with Student Government Association gave her invaluable experience that allows her to know of more resources and leadership tools that can be accessed during her time on the board of regents.

Lamberson is heavily involved on the River Campus in theater groups and in the dance department. She is the president of University Dancers United and was formerly involved in Student Government Association as a senator and served on varying committees.

With a passion for policy and the policy-implementation process, McCrary chose to apply for the student regent position after her university mentor said they thought she would be good for the job.

McCrary wants to improve the student quality of life, support programs and organizations surrounding minority students and ensure the betterment of academic buildings that are well-equipped to serve the students and disciplines housed within them. She also wants to make sure the university stays focused on being student-centered when moving forward with academic restructuring.She is the president of the omicron pi chapter of Delta Sigma Theta sorority incorporated, member of all university judicial board, and is part of the title XI team at Southeast.

Southeast junior Luke LeGrand is majoring in accounting at Southeast, and was born and raised in Cape Girardeau.

He applied for the student regent position because he knew is was a vacant position that was necessary to be filled. He said his freshman year, he started working in the president’s office and experienced a former student regent in his role and wanted to serve the university at a similar capacity. In the president’s office, he gets to work with board materials and the member’s themselves that allowed him to learn a lot about the position and hopes to do a lot of things with it.

Of those things, he said the most important item on his agenda is to be financially responsible with the budget that has been set in place by Gov. Eric Greitens. He also wants to get more involved with the Cape Girardeau community, and focus on the importance of integrating the university within the surrounding area. FInally, he wants to see more intergroup involvement among organizations across campus — working together to host events and speakers as a unit rather than solely relying on the university to provide them.

LeGrand is a member of Lambda Chi Alpha, works in the president’s office and is the treasurer of Student Government Association.