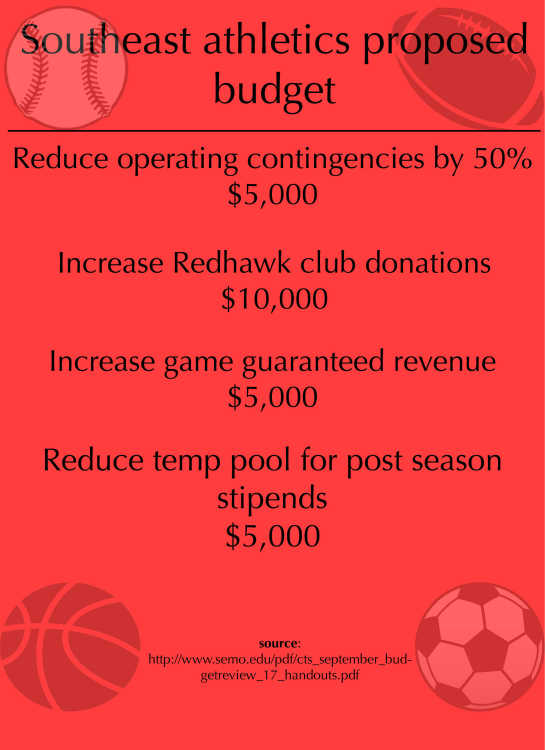 The recent budget cuts going on around Southeast has been affecting many programs, and the athletic department is no different.

“Like everyone else on campus, we’ve been responsible for identifying budget reductions, revenue, enhancement opportunities to try and meet our part of the budget cuts up to this point,” director of athletics Brady Barke said.

Barke added the magnitude of the cuts is still unknown until they know what the budget of FY19 will look like.

“Fortunately for us, we’re in a situation where in addition to being able to identify ways to reduce expenditures, we also have some opportunities to try and generate additional revenues for us to try and offset some of those budget reductions so we can try and continue to do some of the things that we’re doing,” Barke said.

At the moment, Barke said that they are doing as much administrative work as they can and look at how they operate outside of the individual sport.

“This last round of budget cuts we have had to go in and make reductions to the operating budgets for all of our sports,” Barke said. “Administratively, and individually, sports programs have now all felt, at some level, budget cuts and we try to be consistent across the board with them to do that.”

Once complaint Barke heard amid the budget cuts was the men’s basketball team’s trip to Cancun, Mexico to play in the Cancun Challenge. Barke said such trips usually help the program financially.

“The expenses, not only for the trip to Mexico, were provided but also covered the expenses to other road games that we had to go play,” Barke said. “We also received a guaranteed check on top of that as well. Those were games that we played in an effort to generate revenue and offset the budget cuts but of course, the initial reactions were ‘Why are we paying to go send a team to Mexico?’”

Barke said it’s very similar to when they send the football team to play schools like Mizzou and the University of Kansas. Such games are referred to as “money games” and generate revenue for the athletic department.

Barke said his primary focus is in protecting scholarships to student-athletes amid the cuts.

“I think to limit the impact that’s on the student-athletes directly is my main priority at this point,” Barke said.

The athletic department has a set budget for scholarships, and each coach can choose how many scholarships to award.

“Depending on how our coaches award those dollars, they award as much as they can up to the limit of scholarships the NCAA allows,” Barke said. “If you make reductions to that, it could either impact the number of student-athletes that you’re able to recruit to the institution or the type of awards that you can offer and provide the student-athletes, which of course has a huge recruiting impact.”

For student-athletes at Southeast, they will not have to worry about their scholarships being taken away.

Barke said Southeast traditionally has had smaller operating budget for its athletic department compared to other schools in the Ohio Valley Conference, but has made up ground in recent years.

“I think right now, we have gotten ourselves in a position into where we are probably around the middle of all of the schools in the OVC,” Barke said.

Barke also said that it will be interesting to see where Southeast will rank among other OVC schools once schools in Kentucky and Tennessee start to address budget challenges.

To make sure that the athletic department gets through the budget cuts, Barke said all operations will be evaluated.

“We have to make sure that we position athletics for future success, not just looking at how are we getting through the budget cuts,” Barke said. “We’re looking across campus and in other areas and look and say, ‘What is going to be the best way to prepare us to be successful in the future, not just to meet these numbers.’”

Barke said to ensure future success, they may need to cut a little deeper and possibly reinvest in other areas.

“We do have some sports that generate revenue for us and that could be huge drivers for us, not just as an athletic department but as an institution in terms of national exposure and recognition, if those programs are able to realize success,” Barke said. “We have to be strategic in what we do, and we have to find ways to maybe operate differently that what we have because the rate of growth that athletics has compared to other areas within an institution are really significantly different.”

Barke said to help make sure the athletic department succeeds in the future, everyone within the department will have to work together and be a part of the solution.