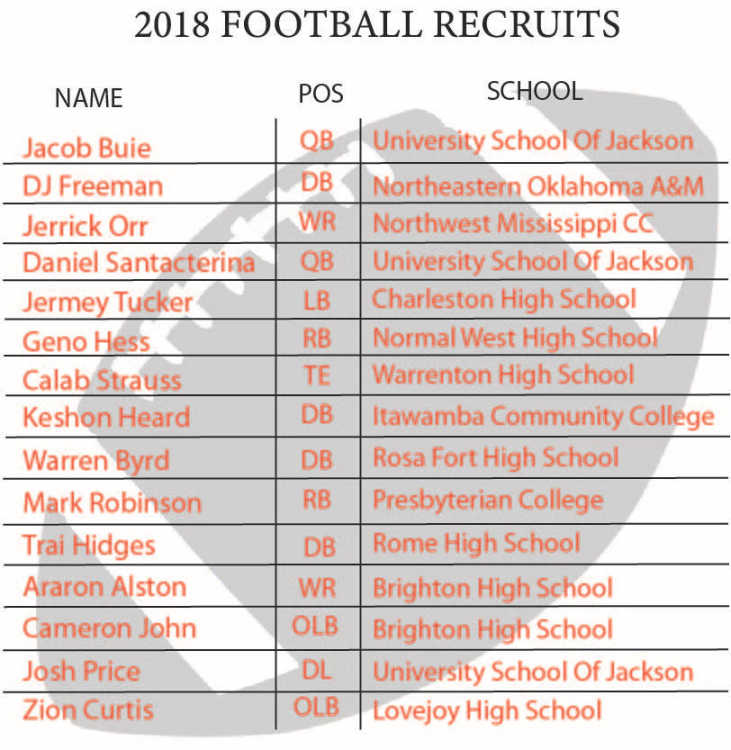 Southeast football coach Tom Matukewicz announced the signing of 22 new recruits for the 2018 season on Wednesday.

The Redhawks signed three quarterbacks, all from a community colleges, which will bring a lot of competition once the training camps begin.

“The thing that I really wanted was some people that have played college football,” Matukewicz said.

Among the 22 new signees, ten of the players have had some sort of college football experience.

After the 2017 season, the Redhawks only lost 15 seniors which resulted in getting a smaller recruiting class compared to years prior. Half of the players the Redhawks signed came from community colleges.

“We had some critical needs that we wanted to try to fill. We feel good about some guys that have had college experience to be able to step up in those roles,” Matukewicz said.

Matukewicz also said the quality of the class is impressive as 75 percent of the players have a grade point average at 3.0 or over.

The one quarterback that stands out is Daniel Santacaterina who played at Northern Illinois the year before. Matukewicz said Santacaterina led NIU to a 21-17 upset victory over Nebraska 21-17 on Sept. 16 completing 15 of 22 passes for 128 yards.

Matukewicz also said he is thankful for Santacaterina wanting to come to Southeast.

“I’m thankful that he saw the improvement that we’re making, the need that we have for that quarterback position and his willingness to come alongside and compete for that job,” Matukewicz said. “Certainly, we didn’t promise him anything, he’s not expecting anything other than an opportunity.”

Matukewicz said that he has always wanted the Redhawks to be a dual threat on offense.

“Jesse [Hosket] was kind of unique and we recruited him. He ended up getting the job and so we tried to fit things around him, but we’d like to have a more mobile guy,” Matukewicz said. “So, everybody that we recruited this year will be a mobile guy, that can run and pass. So, both Santacaterina and [Joe] Pyle are mobile-type players along with our freshman.”

With the quarterback position, Southeast has eight players to choose from to be their starter. Matukewicz said the door for that position is wide open.

Santacaterina had a rotator-cuff surgery last year. Matukewicz said that during the spring he will let all of his quarterbacks battle it out and once summer and fall come around, Santacaterina will battle among some of the other quarterbacks.

Matukewicz said he is confident with their running back core. With the recent transfer of Cameron Sanders, they wanted to get one more running back with college experience.

“Mark Robinson is a transfer [from Presbyterian College], played as a true freshman, led them in touchdowns,” Matukewicz said. “We’re going to be able to have him there along with two really good freshmen.”

On the defensive end, Matukewicz feels comfortable on how the defense stands with the new players they just signed.

DJ Freeman is a 5-8 defensive back weighting 163 pounds. Last year he played for Northeastern Oklahoma A&M and recorded 24 tackles and eight pass breakups. Keshon Heard is also a defensive back who is 5-11 and weighs 305 pounds. Last year he played for Itawamba Community College in Fulton, Mississippi where he recorded 27 tackles in just seven games, one interception, a forced fumble and four pass breakups.

“We signed quite a few high-school kids but we do feel comfortable with DJ [Freeman] and Keshon [Heard] as being guys that have played football a little bit,” Matukewicz said.

With this recruitment class, Matukewicz said the Redhawks wanted to target high-end individuals.

“We’re bringing a lot of people back so we don’t need a lot of people that can impact the roster right away,” Matukewicz said. “I just wanted to make sure that we have high-quality people academically, high-quality people that know how to work. The one characteristic that really stood out in this class would just be the high character of the group.”

During the 2017 season, the Redhawks signed 13 players. Matukewicz said that recruiting players during the season speeds things up.

“We got a lot of kids down here this summer, fell in love with it, got several commitments early,” Matukewicz said.

Matukewicz praised running back coach Ghalli Muhammad-Lankford for the work that he did after losing their recruiting coordinator at the end of the 2017 season.

“We lost our recruiting coordinator at the end of the year and coach Lankford really stepped up and led our efforts,” Matukewicz said. “Under his leadership, we felt great about this class and he took that roll on.”

Matukewicz said his expectations were met with this year’s recruitment class.

“With the camps and access that we had to see people live, I would say our early signing period will always be bigger than our later signing period,” Matukewicz said. “I think just four years of recruiting, we’ve gotten our weekends good; Cape [Girardeau] shows well, the whole university shows well. I think people are seeing the improvements even though we haven’t been able to prove in the win-loss, they really truly can see progress being made and they want to try to be that class to get us over the hump.”