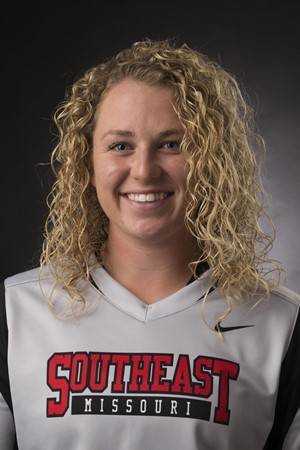 Only 15 games into her sophomore season, Southeast softball player Ashley Ellis is preparing to surpass her output as a freshman. The infielder already has blasted four home runs, one shy of her total from a year ago, and has nine RBIs, nearly half the total she accumulated in 47 games in 2017.

In their game on Feb. 25 against Western Michigan in the Frost Classic Tournament, Ellis helped the Redhawks to a 8-7 victory by hitting a walk-off solo-homer in the bottom of the seventh inning.

Coach Mark Redburn said he was most proud of how hard she battled to eliminate her weakness while batting.

“Last year, teams were able to find the hole in her swing and took advantage of that,” Redburn said. “But this past weekend she really battled her weakness and kept fighting. This time she was able to put the ball in play and come out on top.”

It's just Ellis' second season with the Redhawks, but she has been working on the basics.

"I have been working on the little things, getting back to basics and working on fundamentals," Ellis said.

Redburn agrees that she has put in the time and effort over off season training. He has to remind her that she’s still young in her career but with continual adjustments she will start seeing major changes in her performance.

“She’s the kind of athletes that cares, competes, and wants to continue to keep getting better,” Redburn said.

Ashley Ellis had a big series for the Redhawks during the Frost Classic Tournament in Chattanooga, Tennessee and is looking to keep getting better as the season goes on. She went 6 for 18, with two home-runs and six runs batted in.

Ellis’s personal goal for the season is to keep getting better than she was last year and to continue to to move forward by getting better than she was the day before. Her current batting average of .289 reflects that growth, a notable improvement over her .242 average as a freshman.Last season Ellis also accounted for four home runs and 20 RBIs while starting in all 47 games.

Redburn believes that as Ellis starts to surpass her stats from last year, she will gain confidence.

“Success and confidence go hand-in-hand, when one starts rising the other follows,” Redburn said. “That is what we predict for Ellis as she continues to keep putting in the hard work.”

The graduate of Fox High School in Arnold, Missouri, said she felt comfortable on a recruiting visit to Southeast.

“It’s close to home and it’s close to my grandparents as well,” Ellis said. “The coaching staff is awesome. The way Coach Redburn ran his practices and what he talked about practices, made it seem like a great fit for me.”

Redburn also liked that she was from the regional area. He stated that he likes to recruit locally and was pleased to see Ellis playing on a high end summer softball travelling team he was very familiar with. Redburn said Ellis is a great family person who brings those exact qualities to the softball team.

“I feel very good about this team, how close we are, and our goals for the year.” Ellis said.

The Redhawks, 8-7 on the season, will be in Omaha, Nebraska, to take on the Creighton Blue Jays in a three-game series on March 9 and 10 before returning for their home debut against Indiana State in a doubleheader on March 13.