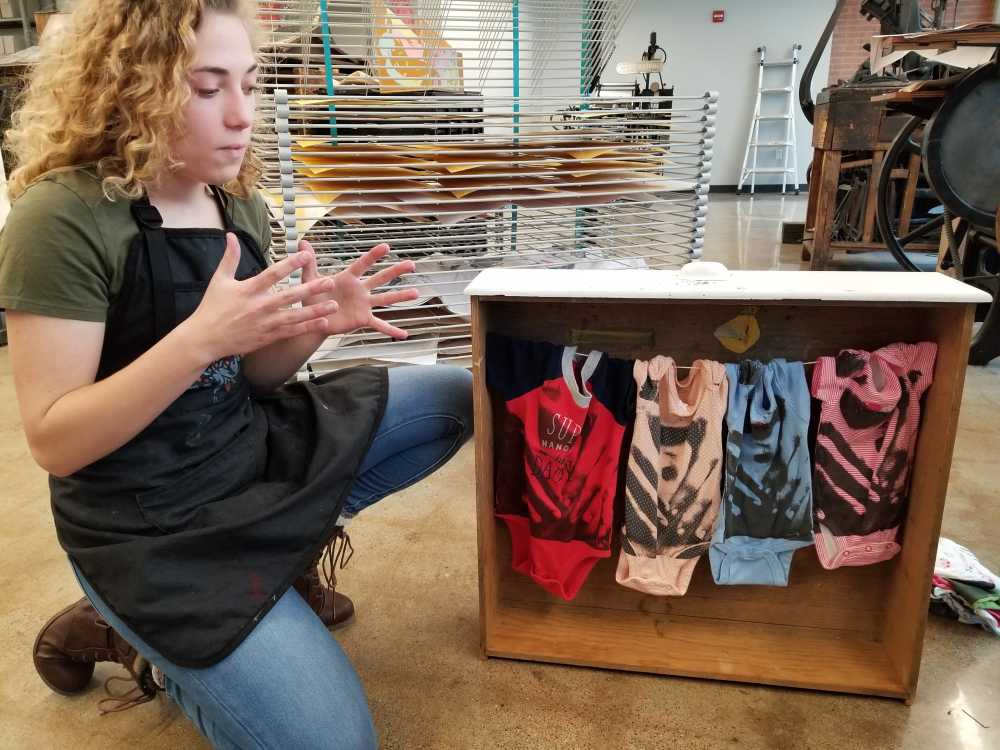 Jessica Lambert explains a piece of the 'Maybe, Maybe Not' series she made last fall.
Photo by Katelyn Mary Skaggs

Jessica Lambert doesn’t know if she will be able to have the children she always wanted after two operations left her ability to do so in question.

She’s a Southeast senior majoring in sculpture and works as the letterpress student manager and gallery student manager of Catapult Creative House. At 19, she had two surgeries to address endometriosis and now, two and half years later, Lambert shares her story through her artwork. She took a printing class and was assigned to create a CMYK print. It was then her passion for art took flight.

Inspired by the popular maternity pose, Lambert created a print of her hands in the shape of a heart over her belly button. One of her four scars was included in the print to represent her uncertainty in her ability to one day bear children.

She also created a print from an image of her uterus and ovaries during surgery.

The print was the beginning of what has become a series called, “Maybe, Maybe Not,” shared as a way for her to find peace with what happened.

“It was kind of a healing process for me,” she said. “…I have to accept these scars and accept this experience that really caused a lot of depression.”

Before her diagnosis, she struggled with her menstrual cycle. Lambert said she knew something was not right but many doctors told her she was fine.

“It’s basically like the worst parts of being a woman, having period pain, acne, food craving so severe and having two-week long periods,” she said.

When she was on her cycle, she said she could not sleep most of the time, and if she could, it was with a heating pad.

“I would have to constantly have tampons and pads on me,” Lambert said. “I had them in every bag I owned, I had them in every single location, my dorm room, my car, my locker room and it took away a lot of time of my life having to make sure I was always prepared for something.”

The physical and mental pain caused her to struggle with depression after the surgeries.

“I wasn’t able to talk to anybody about it,” she said.

Even though she was hurting, she had the mindset to move forward, an attribute fostered during her years as a student-athlete. Lambert played for the Southeast volleyball team for several seasons.

“You get hurt, you go through your physical therapy or whatever you need and then you’re back and you're playing, and you're working through the pain,” she said.

Many of Lambert’s days were filled with pain, but she found healing in her artwork.

“It kind of opened this door to wanting to talk about this experience with my reproductive health that is very personal to me,” she said.

It also gave her the opportunity to hear other women’s stories.

“It really started to make me feel that I wasn’t alone in this situation,” she said.

That feeling led to her creating a book with the maternity-like pose on the cover, which has become part of the “Maybe, Maybe Not” series. She is planning on sharing this book with women who are having trouble with their reproductive health so they can share their stories, as well.

“I can’t represent their experience, but I can [represent] my experience, so why not give them an outlet to talk about that?” she said.

She has made just one book so far and plans to pass the book to other women without publicly sharing it. She’s thinking about making other books featuring stories with women who want to share their stories to be displayed to the public.

“It will slowly be built up with stories, and once this one is filled I will hopefully be able to make another one,” she said.

Her first piece of “Maybe, Maybe Not” series was created last fall, and it’s where the name originated. She printed her maternity-like pose on baby onesies and displayed them in a drawer.

The clothes hanging in the drawer, she said, are a representation of women who want to have children but are unable.

“It was me realizing that I might not have that traditional experience and me realizing I am OK with that,” she said.

She doesn’t know if she will be able to have her own children, but that doesn’t matter to her.

“I see no difference in adopting a child and physically having a child,” Lambert said.

In the future, she hopes to start doing more performance pieces and sharing other women's experiences with the art.