Southeast partners up with Mid-America Transplant 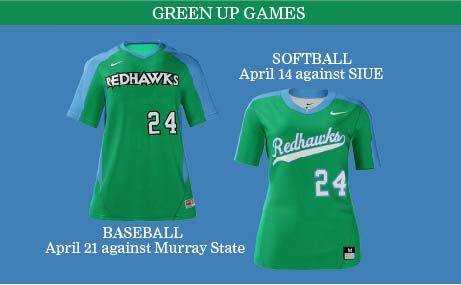 The Southeast Department of Athletics and Mid-America Transplant announced a partnership to bring awareness about organ, eye and tissue donation on Feb. 16.

The deal, which runs through 2020, and was made to not only raise awareness about donating, but to also honor those donor recipients and families. April is also designated as the Donate Life month.

There will be a Green Up game for both baseball and softball, with the baseball game scheduled for April 21 against Murray State, and the softball game April 14 against Southern Illinois University Edwardsville.

When Mid-America Transplant approached Southeast about doing an event to raise awareness for the cause, the Department of Athletics was eager to work out a deal.

“We have a tremendous opportunity to bring insight to others,” softball coach Mark Redburn said. “I’m glad to know that there is a specific organization [for this cause], and I’m excited to be able to provide awareness to that organization and to give people an opportunity and place to go where they can help you be a part of it.”

Mid-America Transplant originally proposed simply having the team wear something green , such as socks or a hat. Southeast’s director of athletics Brady Barke had a better idea: he proposed the team wear green jerseys to really draw attention to the cause.

“To my understanding, there are other institutions that have done similar Donate Life type of initiatives, but they haven’t done anything from a uniform standpoint, or anything that really creates a different level of awareness,” Barke said. “What the end result was, was just a creative way to use our platform to bring awareness to organ and tissue donation.”

Every year, the soccer team hosts a ‘Meg Herndon’ game to honor her and wear green jerseys. This has already been going on, but now that there is a deal with Mid-America Transplant for baseball and softball, it makes the game a little more special.

In the United States, 115,000 people are waiting for an organ transplant. In 2017, Mid-America Transplant connected with 223 donors and transplanted 718 organs.

The first step for people to help save a life is to sign up for the national registry. This can be done at a license renewal facility, or by going to registerme.org.

The second step would be to get people to talk to their family and loved ones, according to Mid-America vice president of community engagement Kevin Lee said. “To speak with them about their desire and wishes to be an organ, tissue and/or eye donor, so that, in the unfortunate, and hopefully unlikely, event that they are ever asked that question ‘Would you like to save a life through donation?’ Their family members know what their wishes are, and they can be honored at that time.”

Donors can be as young as age 1, with parents consent, and as old as 80. Every day, 18 to 22 people die waiting for a transplant. The Department of Athletics and Mid-America are hoping these ‘Green Up’ games will raise awareness in Southeast Missouri and encourage people to sign up to be an organ donor.

There will be a registry table at both games in April to promote organ donation and answer questions.