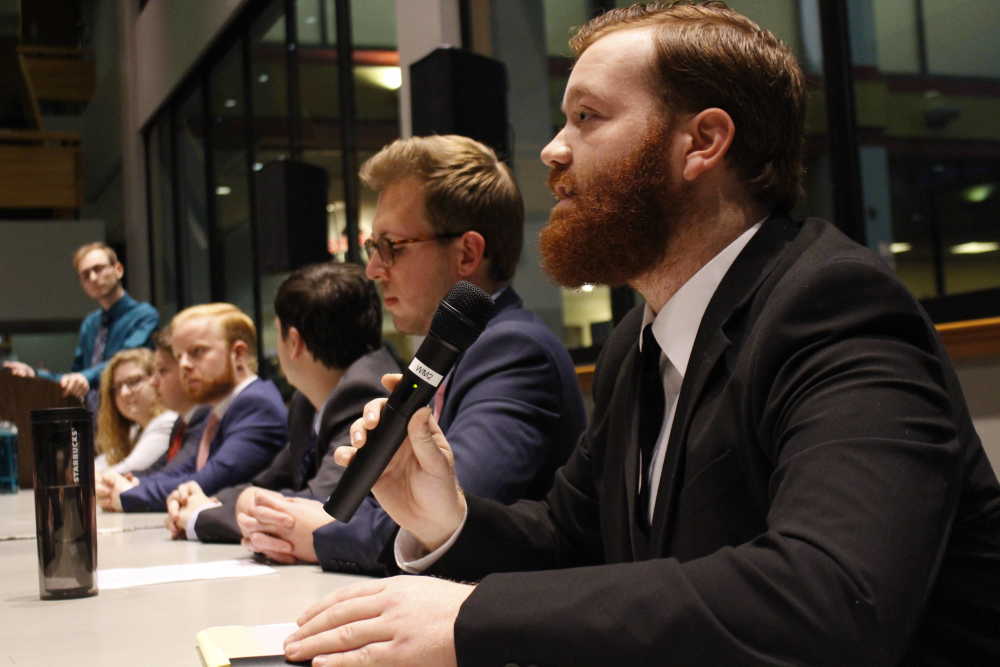 Candidates for SGA president, vice president and treasurer positions participated in a Q&A on Monday night to give their campaign a platform.
Photo by Joshua Dodge

Two-year Student Government Association president Peyton Mogley said she anticipates the incoming candidates to be highly aware of the budget cuts at Southeast. Mogley said it is imperative the candidates come into office with a level head about the situation.

Mogley spoke before a Q&A session among candidates for executive positions for the Student Government Association as election week April 2 at the University Center.

Eight candidates make up the three tickets running for the positions of president, vice president and treasurer.

The previously-formatted questions were directed toward either individual positions or entire tickets.

The second ticket consists of candidate Matt Rolwing for president, Eli Bohnert for vice president and Xander Goffient for treasurer.

Sixteen prepared questions were asked of the panel, but there was also opportunity for the audience to ask additional questions.

Rolwing, when asked about the role of SGA on campus, said student government’s most important role is “to really make sure we are the voice of the student body, and ensuring that everyone’s voice is being heard.”

Kappler, when asked about possible improvements to life at Southeast, said the campus often feels divided, particularly between Greeks and non-Greeks. He said the campus should come together as a whole, in spite of that bias.

“We’re all Southeast students,” Kappler said. “We’re all going to leave here and graduate one day with degrees, and what it says on the paper isn’t going to be different from me or Madison [Smith] or any of you. I think we need to understand that.”

The topic of the pending student fee increases was brought up and, as Mogley anticipated, the candidates came prepared.

As the Q&A came to an end, Kennedy gave each of the tickets a moment for any closing comments.

Each ticket urged everyone to go out and vote.

To vote, visit SELink.semo.edu and log in with your student portal information to submit your ballot online. Voting will take place on April 4 and 5.