A fearless production: 'A Raisin in the Sun' 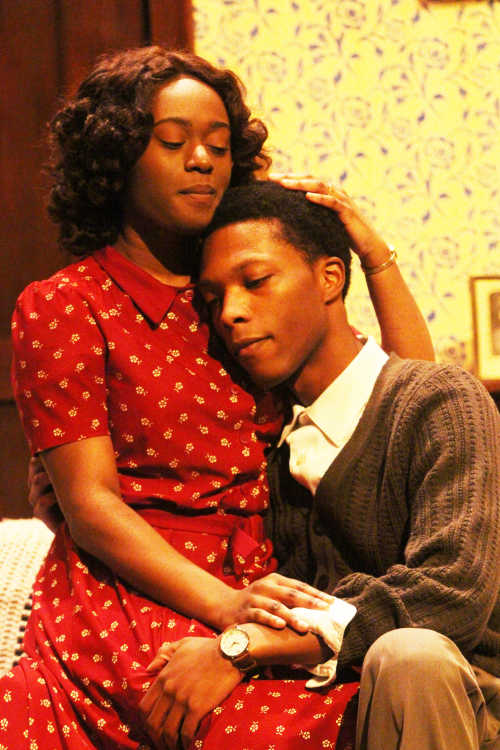 Aalayah Norwood and Jay Wade share an embrace, portraying the Lee family, in the River Campus production 'A Raisin in the Sun.'
Photo by Joshua Dodge

“You are all fearless,” Tyla Abercrumbie, guest director for Southeast’s production of “A Raisin in the Sun,” said to the cast as opening night came to a close.

For the past five weeks, cast members have been perfecting their retelling of the 1959 play, the story of the Lee family, who face a hard decision during hard times in 1950s Chicago.

The show premiered April 18 at the Wendy Kurka Rust Flexible Theatre before a packed audience, and the five subsequent performances sold nearly every available ticket.

Jay Wade, who played Walter Lee, explained the River Campus Theatre department brought in a quest director who knew the show forward and back because of the weight behind the story. Bart Williams, Southeast professor, called some connections he has in Chicago and they referred him to Abercrumbie.

“Tyla Abercrumbie took us and helped us transform into strong, vulnerable characters”, Wade said. “She is such a powerful director who helped me as an actor and forced me to lose control of myself, while gaining control of Walter Lee”.

Lee is a husband and father who does all that he can to provide for his family.

“I learned so much from this experience,” Wade said. “I hope the department does more shows like this one. Not necessarily all-black shows, but Asian, Latino, all different diverse people so we can all experience and see the different sides of cultures.”

Darryl D’Angelo Jones who plays Bobo, one of Lee’s friends, said he felt a need to audition for this play because its usage of a predominantly black cast.

The Tony award-winning show broke grounds on broadway when it was first performed on Broadway in 1959. Lorraine Hansberry wrote the story somewhat referring to her own life of growing up in segregation.

The cast took the roles seriously as the story was close to most of them.

“I researched Walter Lee and tried to understand his feelings and situations as much as I possibly could,” Wade said.

“Having all students play characters 20 some years older than what they are is always hard. These students are so young, but so talented,” Abercrumbie said.

Jones explained how the cast tries to keep the energy lighthearted backstage, since this show can be so dark and hard-hitting. He said they get through each scene by supporting each other.

The students auditioned over a month ago and only had five weeks to rehearse before showtime. Their dedication was evident during the premiere.

Wade said he believes the show will have an impact on the department and the community as a whole.

“I want the community to see that this still happens today,” Wade said. “I am not talking about racism. I am talking about middle-class people thinking money equals happiness. We all need to be proud of who we are and not let money define us.”

Following the history-making premiere, the cast gathered together for a word from their guest director. With tears in her eyes, Abercrumbie told them not to listen to those who try to keep them from their dreams.

“It is time to take on the world and be the artist we look at in years to come, I want to read about each and every one of you,” Abercrumbie said.