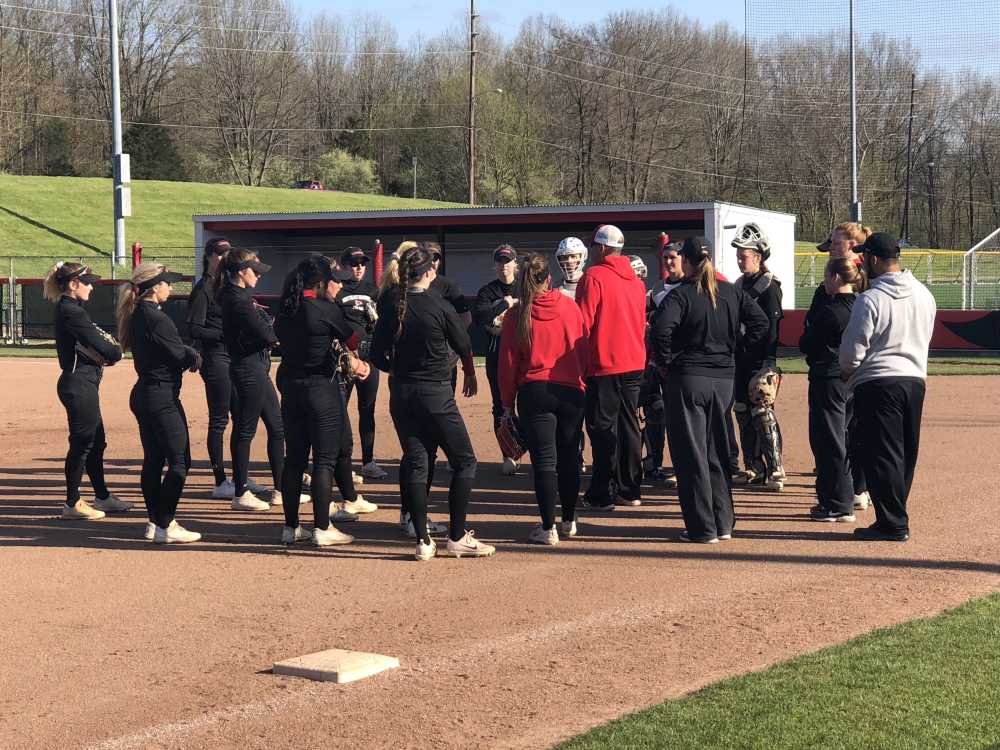 Softball huddles for an end of practice conversation.

A win over UT Martin on Tuesday, April 17 secured the Redhawks their 25th win on the season, their most since 2012.

Since then, the Redhawks have improved their conference record to 11-7 within the Ohio Valley Conference, placing them behind only Jacksonville State University in wins. Their overall record is 27-18.

“UT Martin was the first time we saw a team that really shut us down offensively,” Southeast coach Mark Redburn said. “Prior to that, we are averaging five-plus runs a game, so that’s pretty good.”

In winning the most games since 2012, the Redhawks beat both Jacksonville State University and Southern Illinois University- Edwardsville for the first time since 2012. Other notable wins have come against Missouri and Memphis.

Part of the Redhawks success this season is because of their performance at home. Only three of their 18 losses have come on home turf.

“Sometimes it seems they play better on the road because they get away from everything, but for us, [the ladies] really appreciate being able to be home in front of friends and family,” Redburn said. “It is a great advantage for us, we love our place here, and we get to end our season here at home.”

Redburn attributes the team’s fighting spirit to his core group of starters. Last season, seven of the nine starters were underclassmen, freshmen and sophomores, who have since had the time to grow and become more experienced. He believes whatever struggles the now sophomores and juniors faced last season are paying off big time now.

“We’ve got a great core group, so if somebody has a down game, two or three others are going to have a good game and we’re going to stay right there in it,” Redburn said. “We have a really good hitting lineup, and different players step up and go through these streaks. That’s the great thing about it, we’re not having to rely on [one person]. [Outfielder] Rachel Anderson hit .400 for these [past] 11 games. [Outfielder] Mykaela Arellanes came back this past two game series against UT Martin, and sure enough she squared some balls up in that second game for the win.”

With the absence of Arellanes for nine of the past eleven games, juniors like infielder/outfielder Sarah Messex, infielder Parker Bandy and pitcher Haley Thogmartin have stepped up to fill the void, according to Redburn. Before Arellanes went out with a concussion, she was the team’s leadoff hitter, and the Redhawks were still able to perform at the level they have been without their number one hitter.

Arellanes is hitting .361 on the season, leading the Redhawks. Messex is the Redhawks leader in Runs Batted In (30) and home runs (7). Anderson is leading the OVC in triples (7).

At this point, the Redhawks are still fighting to get into the OVC tournament. If they do get in, Redburn feels confident they have a chance to win it.

The Redhawks will close out their season Sunday, April 29, at the Southeast Softball Complex against Belmont University, and hope to move onto tournament play after that.