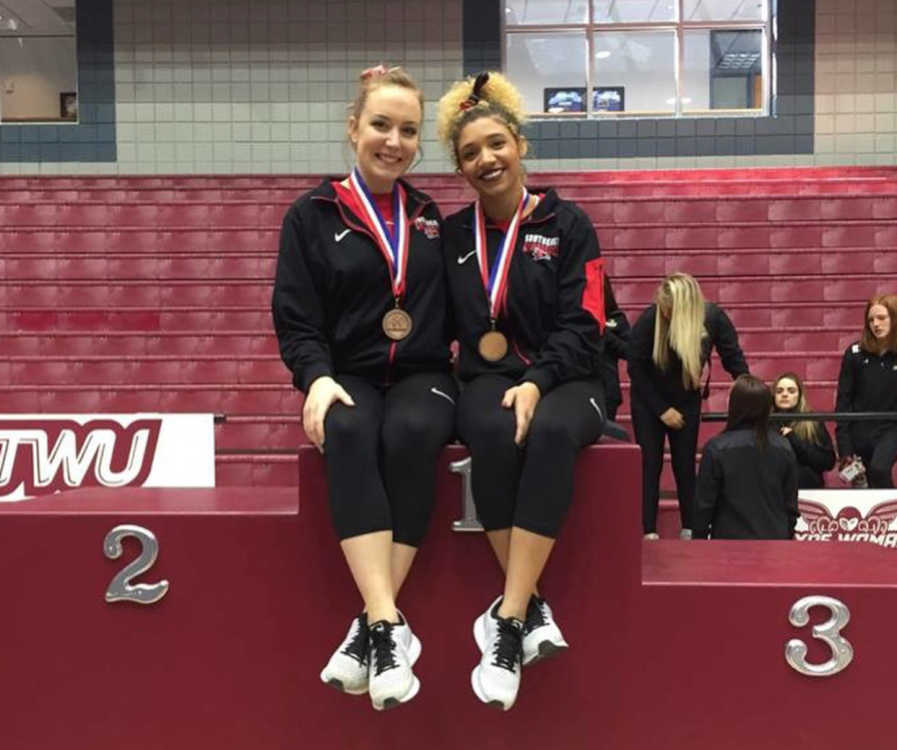 At the second session, Brawner totaled a 9.7875 on vault, which tied for sixth on the apparatus, while Jones registered a beam routine of 9.8000 and tied for third on the event.

“It was nice being able to do it with my teammates,” Brawner said, “because we didn’t know until a few weeks before if we were going to. I thought my season had ended at regionals so it was a little bit of a surprise.”

“Knowing that it was going to be my last season, I tried to give everything I had for every single turn.” Jones said.

All of Southeast's gymnasts rotated with Bridgeport, Lindenwood, Air Force and Penn two days earlier at the Kitty Magee Arena on the campus of Texas Woman's University.

“This is the closest the team has ever been since I have been on Southeast’s team,” Brawner said, “The freshmen really had a really good attitude and we just welcomed them with open arms, so the chemistry we had really showed this year.”

Brawner tied for second on vault in the first session April 13 with a score of 9.800, and added a 9.825 bars routine and totaled a 9.850 on floor with a seventh place finish.

Jones finished tied for second on balance beam with a career-tying score of 9.850. Jones also

chipped in a 9.825 on floor with a 10th place finish and ended the meet with a 9.275 on bars. “I had been in such an environment like that, everyone was just so excited, like the crowd was going crazy so it made all of us really excited,” Jones said.

“I was super-excited they went out there a did their gymnastics like they have been all season long,” Southeast coach Brittney Emmons said.

Stanley and Brawner both tied for sixth out of 32 competitors.

“I could not be any prouder for these seniors that have been to postseason before. They had the experience of competing in multiple Conference Championships for these positions,” Emmons said, “We also brought quite a few freshmen and a sophomore to compete at something this big of a caliber, which was awesome.”

Sophomore Megan Dennis registered a career-best beam score of 9.775 in the third rotation and tied for 12th.

Southeast received strong finishes from its freshmen. Alana Fischer posted a 9.750 on beam and then tallied a 9.425 on bars, Gabrielle Adams added a 9.550 on vault, and Samantha Gallet matched her personal-best bars score of 9.775 and also recorded a 9.500 on vault.

“Nationals overall went really well for all of us, including myself,” Emmons said, “ and I truly believe that this is something that will be great for SEMO’s gymnastics in years to come.”

Brawner, Jones and Stanley were also recognized for their careers as senior athletes.

Overall, Brawner competed in all 12 meets, finished 12th in the all-around competition at the NCAA Regional in Fayetteville, Arkansas, with a 37.225 (4/1). And won the all-around and vault titles at the Midwest Independent Conference Championship in Chicago with a career-best score of 39.225 (3/18)

She also recorded career-highs on vault (9.900) and bars (9.825) at the MIC Championshnip, which earned her first team all-conference honors on vault, bars and in the all-around with a second-team selection for beam. And, Brawner earned MIC Gymnast of the Week (3/8) for her fifth career honor.

Jones competed in all 12 meets in bars, beam and floor. She compiled 15 scores of 9.7 or higher, notched a season-high of 9.850 to win floor at the tri-meet with Texas Woman's and Rutgers. She also posted a career-high 9.825 on bars against Air Force (3/5) to claim the title and set a career-high on beam with a 9.850 in the season finale at Western Michigan (3/11).

Most recently Jones earned Midwest Independent Conference Specialist of the Week (3/15) for her second career honor and Named to the MIC Scholastic All-Conference team.

Stanley posted a season-high on bars (9.775) versus Air Force (3/5) and notched a season-best on vault (9.625) in the season finale at Western Michigan (3/11). It was her second time selected for the MIC Scholastic All-Conference team.