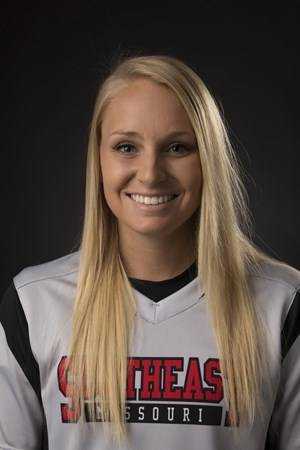 Senior softball pitcher Maddie Krumrey will be graduating in December bringing her Collegiate softball career to an end, her four years on the team will make her ineligible for the spring season. Krumrey’s last regular season game took place over the weekend. The team swept Belmont, winning 3-2 and 4-1 securing their spot in the OVC tournament.

Dream job: Partner in a firm.

Krumrey's first experiences playing the game started when she was little. “I grew up playing T-ball from a really young age, and started playing travel select softball when I was about nine,” Krumrey said.

As a senior on the team, Krumrey says, “It’s fun because there’s a leadership role and there’s also a vibe of this is the end so you have to have a lot more fun.”

“I’ll be taking summer classes and I’ll be back here in the fall to graduate in December,” Krumrey said. She won’t be allowed to continue softball though, as her eligibility is up after this spring.

As Krumrey’s time as a Southeast athlete quickly comes to an end, she says that she doesn’t regret anything, and she’s happy with the experiences she was able to have.

“Playing a college sport is a really big deal and I’m really proud that I’ve made it 4 years and stayed committed to something and stuck with it, I’ve had a lot of fun,” Krumrey said.

Krumrey’s favorite memory from her softball career is beating Mizzou this year.

“A few weeks ago, we beat them at home for the first time.”

Some advice that Krumrey has for future Southeast softball players would be not to wish any of it away.

“There are days where it’s hard, and it’s a grind, and you wish you didn’t have to go to practice, or maybe wake up and go run, but being a senior now, it goes by really fast,” Krumrey said.

Something Krumrey is looking forward to after her time at Southeast is not waking up sore every day.

“Enjoying life after softball and seeing what that is going to look like for me because I’ve never not played softball, it’s going to be interesting to see,” Krumrey said.

Her softball career isn’t quite over, though. One of her last times playing competitive softball will be this summer in Australia.

“This company called beyond sports tours actually emailed me, and three other girls on the team, telling us we have been selected to play on an international team in Australia,” Krumrey said. “We’re going for two weeks, and playing with other girls from all over the country.”

The OVC tournament starts May 9, in Oxford, Alabama. It is still TBA who Krumrey and the Redhawks will play, but they are sure to be ready.