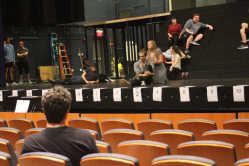 With a rock band on stage and elaborate lighting, the Southeast Conservatory of Theatre and Dance will present “Jesus Christ Superstar” later this month at the River Campus.

Director Mac McIntosh said he hopes the 1970s rock opera, written by Andrew Lloyd Webber and Tim Rice, gets the audience dancing, clapping and rocking along since it is essentially a “giant rock concert.”

“Many universities shy away from doing a show like this because it’s 70s hard rock,” McIntosh said. “It’s very difficult to sing, but our conservatory students are so awesome that we’re able to do it.”

The stage is set up as a rock show with the band on the stage, but the set also moves around and has a 20-foot neon cross that will emerge from the ground.

Lighting designer Chris Haug said there are 454 lighting instruments as part of the set to give it more of a ‘70s rock concert feel.

Student choreographer Malachi Marrero found inspiration for the choreography by watching prominent backup pop and rock dancers, such as Janet Jackson, as those choreographers were used to working with this type of music.

“A lot of the dance in this show isn’t what we offer in classes here,” Marrero said. “It was inspiring to watch [the actors] grow and execute things properly.”

Junior Nick Kuchem will be portraying Judas, a role that he said is interesting and emotionally raw.

“This show, especially the way we’ve taken it, is so raw” Kuchem said.

Kamron Underwood will play the role of Jesus, the same role the sophomore played at Cape Girardeau Central High School, which took on the production his senior year.

“This character covers one of my favorite subject matters: the human heart and conflict with itself,” Underwood said. “It’s such a surreal experience.”

Noel Huntley will portray Mary. She views this as a love story for Mary because it is her love for Jesus that “turns her life around.”

“I come to rehearsal everyday and I just love. I love the people and I love the show,” Huntley said. “I have had this show memorized since I was 5 or 6 years old.”

McIntosh said he has high hopes for the production.

“It’s a giant, kick-ass rock concert. I want people to come and have an amazing time.” McIntosh said.

The show will play at Bedell Performance Hall Sept. 26-30 at 7:30 p.m. with matinee performances Saturday and Sunday at 2 p.m..