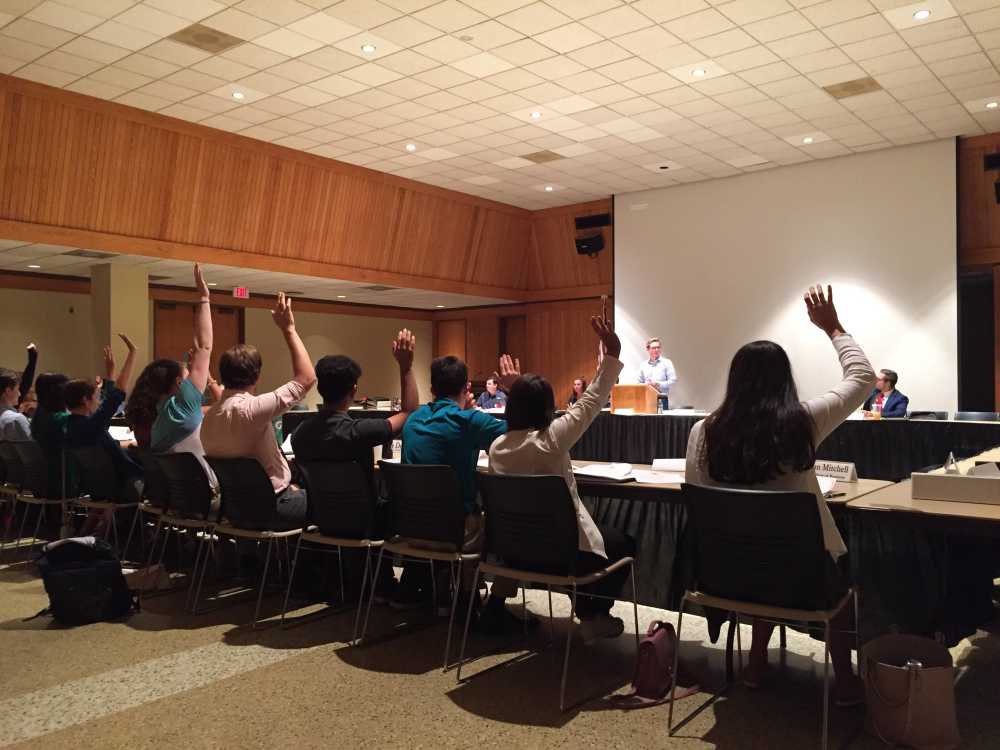 SGA Senators take a vote at the first meeting of the year.
Photo by Katelyn Mary Skaggs

Student Government Association started off the school year by voting on its candidates for Man and Woman of the Year and for homecoming, voting on three resolutions and tabling two.

Many student organizations applied to be recognized by SGA, which makes them eligible to receive funding for the year, if requested. All organizations that requested approval with the exception of Kappa Beta Gamma, a new sorority on campus that is not apart of the Panhellenic Council, were approved. Action on the resolution concerning the sorority was tabled.

Special projects committee chair Justin Jacobs asked, “Do you know why Kappa Beta Gamma wasn’t recognized by the school or by Greek life?”

In response, senator Margaret Schauwecker cited concerns about the organization.

“I just want to point out that they follow different rules than the Panhellenic council does here,” Schauwecker said. “They have had unacceptable, I think, behaviors from some of the members.”

SGA advisor, Michele Irby brought to SGA’s attention that they do not vote upon the misconduct of a group, but only on the approval of applications submitted.

Diversity and Inclusion by-laws were one of the discussed resolutions at the meeting. The by-laws are set up to accept members who will help create a more culturally diverse campus community. The resolution passed.

An SGA budget proposal was presented by Ellenburg outlining possible SGA expenses for the school year. The resolution was tabled.

Kaetlin Lamberson and Ellenburg, both seniors, were chosen to represent SGA as their homecoming candidates for Man and Woman of the year.