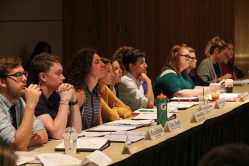 SGA Senators listen to a discussion on the budget during the Sept. 18 meeting.
Photo by Katelyn Mary Skaggs ~ News Editor

Xavier Payne was appointed to be the Diversity and Inclusion chair, one of the two positions approved by the senate.

“I will make it my job and priority to get more diversity out here on campus,” Payne said. “I want to bring diversity to Southeast as well as bring it to the community because there is a divide between the campus and the community.”

SGA president Matthew Rowling addressed the situation which took place at last week’s meeting with sorority Kappa Beta Gamma. Rowling admitted they were in the wrong by tabling the recognition based on the SGA bylaws and Kappa Beta Gamma were approved.

Special Projects Committee chair Justin Jacob will be helping with recycling around campus, by teaming with Pepsi and Coca-Cola and about getting containers of large bottles to put around campus where students can deposit recyclables.

Ellenburg was selected to the undergraduate research committee in a unanimous vote.

A question was proposed by SGA advisor Michele Irby on whether graduate diplomas should be issued with covers.

“Do people want diploma covers? Should we increase the quality of the paper? Do you want them mailed to you,” Irby asked.

Irby said the paper for the diplomas ranges from $11 to $15. Irby inquired into how such cost would be paid.

Rowling proposed having a TV available on the third floor of the University Center before you enter Redhawks Market. He said the TV would be a way to broadcast student government meetings, student organization fliers, photos of student organizations and weekly updates.

Freshman Layla Bouzihay had some concerns about the updates on organizations.

“I’m afraid that it won’t be updated thoroughly enough, they’ll lack on the events, or someone won’t update it. It needs to be constantly updated,” Bouzihay said.

There were other concerns, including possible theft of the TV. Irby, said that would not be an issue.

SGA tabled two bylaws, which would change the number of senators for each college and create two standing committees and three ad-hoc committees. The student senate approved the budget for FY 18-19. For updates, visit southeastarrow.com