‘The Marriage of Bette and Boo:’ dark comedy coming to River Campus 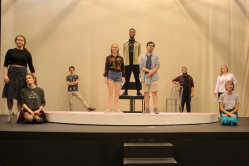 The cast of “The Marriage of Bette and Boo” at rehearsal.
Photo by Brooke Holford.

The Conservatory of Theatre and Dance is opening its curtains to the families of Bette Brennan and Boo Hudlocke this October for the dark comedy “The Marriage of Bette and Boo.”

The show is a memory play that is narrated by the Hudlocke’s only surviving son, Matt. Set in the 1950s, it follows Bette and Boo throughout their lives.

Bette and Boo just want to live the ‘50s dream, have children and a happy marriage, but life’s unexpected tragedies stop them countless times and in countless ways.

“This play is like a wooden roller coaster. It goes very fast but it also hits you really hard at some points,” said Justin Panacchia, who plays Matt. “It’s a very back-and-forth play that takes you through this journey of a family and one person’s part of it.”

The character of Matt goes through the self-actualization process and tries to understand what went wrong in his family and how he can prevent himself from making those same mistakes.

Director and Southeast professor Roxanne Wellington, as well as many members of the cast, said they bonded early in the rehearsal process.

“During the first week of rehearsal, we all opened up about something in our own family life. It just kind of happened because there’s something about this play that almost hits a little nerve. It makes you want to talk about these things,” Wellington said. 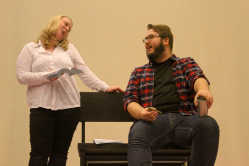 Emy Smith (left) and Jackson Daleen (right) rehearsing for “The Marriage of Bette and Boo.”
Photo by Brooke Holford

The writer of the play, Christopher Durang, based it on his parents. The play was first performed in New York in 1985.

Wellington said the play shines a spotlight on a lot of issues still relevant today and somewhat hard to talk about, even 30 years after it was written.

“Durang is trying to say that we can’t control the horrible things that happen to us,” Wellington said. “But we have to deal with them, and how we cope with loss and grief and sadness is a representation of our own humanity.”

Mental health is a running theme, with verbal abuse, neglect, bitterness and passive-aggressive behavior exhibited, and drinking among the coping mechanisms.

“I love the controversial elements in this play, things like Catholicism, faith, some traumatic events, but there’s so much more to the show than that,” Wellington said.

Wellington and the cast expressed hope that those elements mixed with the right amount of humor and a diverse group of characters will build a relatable connection with the audience.

“I think a lot of people are going to be surprised by how different every character is and how many different perspectives you get,” said Sean Seifert, who plays Paul Brennan. That’s why, honestly, almost anybody should be able to connect to this show in some way.”