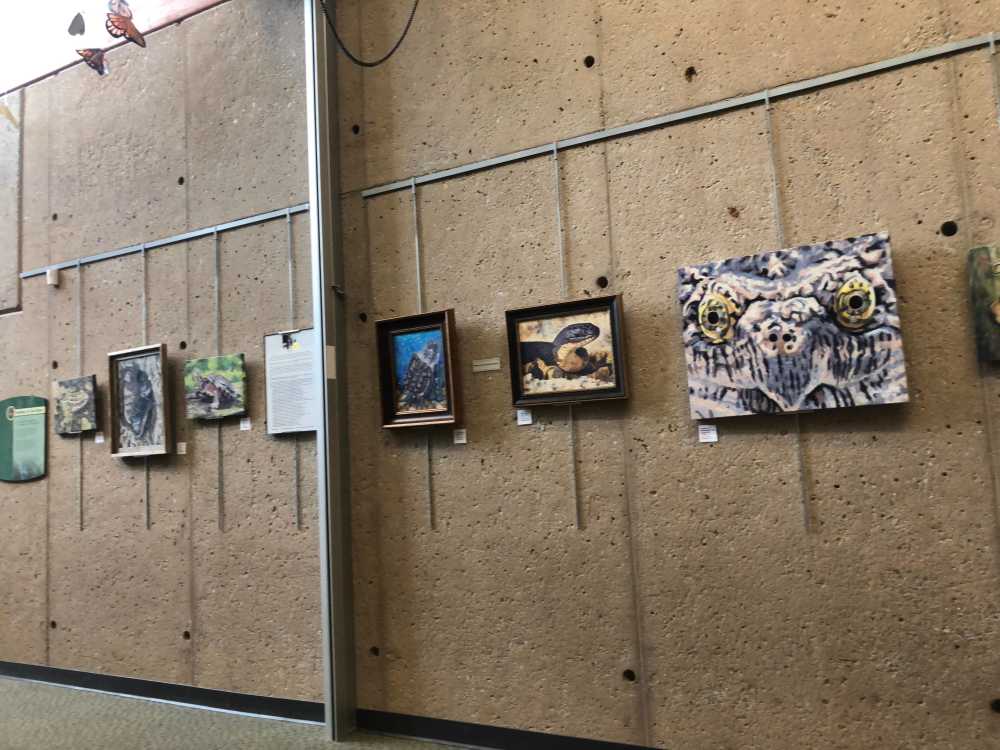 The adaptations, focusing on just one moment are. One painting, a 12x19 titled “Water Snake” captures the poise of a black and yellow plain-bellied water snake in a moment of wonder. “Water Snake” is bordered by a black and gold frame that compliments the snake’s beauty and the overall theme of the portrait.

Another piece of Carter’s that stood out was “Face2Face w/a Snapping Turtle.” The piece is made from vivid oil-based blues and yellows complemented by softer greens and blacks. The canvas hangs squarely with only the large, detailed glare of a snapping turtle staring back at its viewer. After a while the painting begins to seem more like an unending staring contest, one that you probably couldn’t win if you tried. The turtle, his hook nose threatening to tear the canvas that he’s perpetually bound to, dares you to move while he encapsulates your imagination. Dave Carter includes a lot of personality in his paintings. There was even a moment that I thought the turtle could have just told a bad joke, and felt utterly satisfied with himself in the wake.

Carter’s “Black Snake Tree” features an image of two snakes creeping their way out of a hole in a tree. The shadows of the snake and the darkness of the hole invite the viewer to wonder what may be deeper inside. Though the images seem deeply minimal, one can still appreciate the detail taken to add every crack and crease in the wood surrounding the snakes. The same detail once again goes into the frame selection. The frame of the canvas almost perfectly matches the hue of the pale wood in the painting. This creates an interesting effect, which makes it seem like one of the snakes is just dying to lunge out of the tree and onto the ground in front of the viewer. (I’m rather glad this wasn’t the case while I viewed.)

Dave Carter’s art feels rustic, and home-like. The capturing of emotion, personality, and mood is a fixture in each piece, and the artist does a fantastic job of portraying those traits.

When asked what advice he would impart to any young person who creates their own art Dave said, “Take every opportunity to show your work at the best advantage to you. If you can’t do that, then just start asking who will let you show your work.”

Dave Carter’s art will be on display in the Nature Center until the beginning of October.