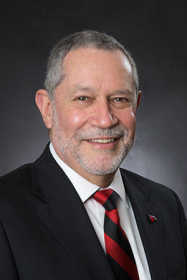 Southeast president Carlos Vargas emailed a campus-wide apology Sept. 21 in regard to accepting an offer to drink from a beer bong six days earlier at the Southern Illinois University-Carbondale tailgate, and his message has drawn attention well beyond the campus through social media.

In the statement Vargas said that a beer bong is a device that is normally associated with binge drinking and something he does not condone.

“The above action projects an image that I am not proud of, is not flattering, and certainly not expected from the president of Southeast Missouri State University,” Vargas stated in his email.

The incident and subsequent apology have drawn large reaction from the Southeast community and more widely, on the internet.

A screenshot of the email was posted on Old Row’s instagram account (a national website that shows campus culture) Sept. 22 more than 54,000 likes in two days.

Some Southeast students have found Vargas’ apology unnecessary, including Kyle Howley who is a graduate student in the master's program for higher education and administration.

Howley said the email seemed forced, and after watching the video he did not see why it was an issue. He said although college students are impressionable, they are also adults.

Howley said because Vargas did not break any laws he felt the email should have been less of an apology and more about educating students on healthy drinking habits.

“To me, it seemed that Dr. Vargas is being just that much more relatable to students,” Howley said. “I appreciate that and even though there was alcohol involved, he is obviously of age, so I don’t see an issue with that.”

“It wasn’t insulting in any way, shape or form,” he said.

Drust attended Southeast while Dr. Kenneth W. Dobbins was president and from social media and friends he feels Vargas has a better connection with students than Dobbins had.

“I saw [Dobbins] at a few events,” he said. “Dobbins was 100 percent university president 24-7, almost like a robot. He was more like an entity.”

Drust said he always felt Dobbins was too busy to speak with him and never visited any clubs or activities unplanned.

“I never really had a one-on-one chat with him,” he said.

Senior social work major Caleb Robinson said he feared that Vargas would leave the university over the incident.

“I just think he was out having fun and when presented with the opportunity he took it,” Robinson said. “There’s worse things that he could have done.”

The Board of Regents also released a statement about Vargas’ actions in the same email.

“While this certainly represents a lapse in judgment on his part, this one incident does not define who he is,” wrote board president Donald G. LaFerla. “I spoke with University President Vargas who immediately accepted responsibility for his actions, and he assured me that this one incident is not reflective of a broader pattern of behavior.”

LaFerla ended his statement with support for Vargas now and in the future.