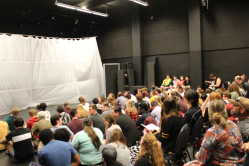 The large audience packed into the directing studio on Sept. 21 to watch the student directed "She Kills Monsters.
Photo by Andrew Myles

“She Kills Monsters" a story about Agnes Evans a women who has lost her sister and finds a notebook that leads her to play a character in a Dungeons and Dragons style game was put on entirely by students at the River Campus on Sept. 20-21.

About forty to fifty people were pack in the directing studio at the Dobbins River Campus Center where the play was held.

Dungeons and Dragons is a fantasy role-playing game set in an imaginary world based on medieval mythology.

Evans’ sister Tilly was a well-known Dungeons and Dragons player and this would lead Evans to start playing a role that was designed by her sister.

This role helped her discover more about her sister and helped with her grieving and loss process.

Director Katrina Yeager said it took three weeks for her to put together the set and finalize the show.

Jade Sause, an actor in the production questioned the Dungeons and Dragons script.

“There were a few things about the technical aspect that made me question the writing style, but the script is still beautiful,” Sause said.

The university paid for the rights to the play, but did not provide any money to the budget for the show, so it was all out of pocket for students.

“There was no budget from the university because it is a workshop production so, we used money out of our own pockets,” Yeager said.

She also said the money was used for costumes and the curtain utilized between the changing of scenes.

Two characters in the play who stood out were Lilith and Farrah due to their costumes and makeup.

“I really enjoyed designing Lilith and Farrah’s makeup and hair because Farrah’s was very vine-oriented with sparkles everywhere because she is a fairy, with Lilith it was very dark and demonic.” Makeup and hair designer Jolene Fredrich said.

Andrew Feigenbaum a student at southeast who attended the play said, “The play started off a little slow but has kept my interest.”