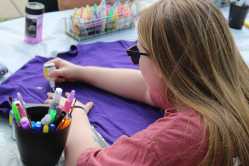 Southeast junior Rachel Rigney designs a T-shirt at the Clothesline Project on Oct. 3. on campus. Redhawks Rising, Redhawk Health Educators and the Campus Violence Prevention Program were sponsors of the event.
Photo by Madison Little

Students showed their support for each other in the third annual Clothesline Project at Southeast on Oct. 3-5.

The Clothesline Project is a global awareness campaign to end domestic violence. Survivors are given the opportunity to decorate T-shirts while others decorated clothespins.

Redhawks Rising, Redhawk Health Educators and the Campus Violence Prevention Program were sponsors of the event.

Redhawks Rising treasurer Kegan Summers said the clothespins are symbolic of the supporters holding the victims up, being there for them and showing them that they do not have to go through it alone.

“This project gives students a chance to tell their story without having to have their face attached to it,” Redhawks Rising vice president Kyleigh Williamson said. “Nobody knows who made what T-shirts, so it allows survivors to be heard in an anonymous way.”

The T-shirts were hung between Academic Hall and the University Center from 11 a.m. to 1 p.m. each day.

“There’s been people who have said that they haven’t even told their families and that writing on the T-shirt has been the first time they’ve outwardly spoken about their experience,” Redhawks Rising member Maddy James said.

Williamson said the event has grown since the first year. She said the environment has become more raw and inviting, and students are more willing to participate.

“I hope everyone walks away from this feeling like there’s something they can do,” Williamson said. “I hope it empowers people to do something and hold other people accountable, but also I hope this shows survivors that they are not alone.” 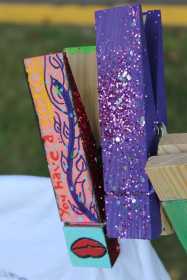 Members of Redhawk Health Educators and Redhawks Rising said they hope to see more male participation in the future and hope they can help end the stigma behind sexual assaults involving males on college campuses.

“Everyone knows that one in five women will experience sexual violence,” Campus Violence Prevention Program coordinator Donna St. Sauver said. “But many people don’t know that 15 percent of males on college campuses are victims of sexual or domestic violence.”

The next event this month sponsored by Redhawks Rising is “Team up! Against DV!” for homecoming. There will be a tailgate with food, T-shirts, face painting and more. It will provide another opportunity for students to show their support against domestic and sexual violence.

“If we don’t talk about this issue, nothing will happen to make it stop,” Southeast junior Anna Drendel said.