The orchestra preps their instruments before their opening song.
By Hailey Hampton ~ Arrow Reporter

The performance on Tuesday, Oct. 9 was the Gala Season Opener in which Judd accompanied the orchestra in “Rhapsody in Blue,” a well-known piece by Gershwin.

Judd is an accomplished solo recitalist who has performed in Italy, Spain, Sweden, Taiwan, China and the Philippines. She has accompanied the Southeast Symphony Orchestra more than 20 times.

“Jennifer was so easy to work with,” sophomore violinist Danielle Seidel said. “She added the color to ‘Rhapsody in Blue’ with her solo.”

This performance was unique in that it had a jazzier presentation than typically is played in the symphony orchestra concerts, Seidel said. 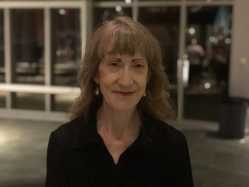 Dr. Sara Edgerton was pleased with the performance.
By Hailey Hampton ~ Arrow Reporter

“[Judd] was flexible with the tempos and really excited about the concert,” orchestra conductor Dr. Sara Edgerton, the music and artistic director said. “She added energy to the performance.”

Southeast student Anastasia Novak attended the concert to support her friend in the orchestra, while also enjoying Judd’s accompaniment.

“She was impressive and fun to watch and listen to,” Novak said.

“Rhapsody in Blue” received a standing ovation from the audience, leading the show to intermission.

Edgerton described the other pieces performed as “beautiful American music.”

One of those pieces, “Lullaby” was written in 1919 as a student piece but not published until after the composer’s death, Edgerton said. The piece, received well by the audience, featured first violinist and concertmaster Sophia Han with a short solo and featured several student instrumentalists.

“I forgot they were students at some points,” Novak said. “It sounded professional.”

Edgerton said seeing the students’ passion was her favorite thing about putting on the performance.

As this was the season opener, the symphony orchestra will have another performance in November, and two bigger performances this spring.