“The Past is Never Dead:” Documentary of David Robinson’s exoneration screens in Rose Theater 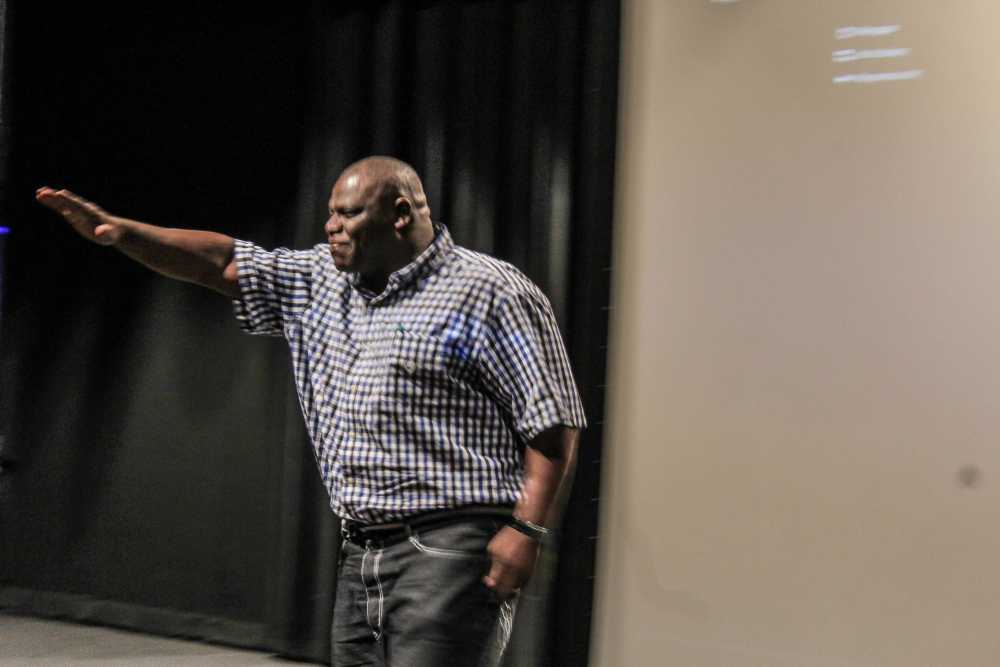 Sikeston native David Robinson spent 17 years and 9 months incarcerated for a crime he did not commit. Five months and one day after his release he spoke publicly for the first time, addressing family and supporters in Rose Theatre on Southeast’s campus following a preview screening of a documentary detailing his journey.

“I was supposed to die in prison,” Robinson told the audience, with tears in his eyes. “But we overcame that.”

“The Past is Never Dead,” a film by cinematographer and rustmedia affiliate Steve Turner, told the story of Robinson’s arrest in 2000, and the almost two-decade battle for exoneration endured by the Sikeston native.

Following the screening, Robinson spoke alongside a panel of his St. Louis-based legal team — who worked pro-bono for some 10 years on his behalf — and Bob Miller, editor of the Southeast Missourian, who led investigations on the man’s innocence and the law enforcement misconduct that placed him behind bars. The panel was moderated by associate professor of mass communication Tamara Zellars Buck.

Robinson said viewing the film for the first time, in the presence of so many of his supporters, made him feel a part of something much larger.

“All the bitterness and hate, there’s no room for it,” he said.

The panel recounted and expanded on the various elements that led to his eventual release — the recanting of “snitches,” or paid-police informants, who had testified falsely against him, the multiple and hasty denials of writ of habeas corpus and the insistent efforts of local media and Robinson’s lawyers to attain justice.

One panel expert and member of Robinson’s legal team, Charles Weiss, who specializes in litigation, said the case was striking because another person admitted to the murder, and yet, Robinson remained incarcerated for years.

“It really shows the effect that a wrongful conviction can have on a family,” Weis said.

Another lawyer on the panel, Jim Wyrsch, recalled how “deflating” it was for the case to be repeatedly dismissed by state courts at various levels. In one example, he said, a report of Robinson’s innocence that exceeded 70 pages of recanted state witness statements and alibilical evidence was turned away by an appellate court after a few days.

“It seemed pretty unlikely that any law clerk could have actually made it through all of that information in a single weekend,” Wyrsch said.

He called the Southeast Missourian “instrumental” in bringing Robinson’s story to light.

Miller said state judicial systems ought to be more often in pursuit of justice, instead of clinging to procedure. He said this will only happen as a result of the public demanding change, demanding public servants do what is right. In response to a question about what those in the audience can do to make a difference, he added, citizens who serve jury duty should assume a defendant is innocent until absolutely proven guilty.

Those in attendance applauded upon learning Drew Juden, the officer who originally arrested Robinson, had been fired. There were questions subsequently about whether any accountability of punishment is in place for law enforcement found guilty of misconduct. The panel answered resoundingly that there is very little “self-policing” of police conduct, and “officers basically enjoy full immunity.”

Robinson remarked there is “much evil in the world, especially in places of power.” But he added his purpose in life now is to help others who are facing a situation like the one he was in. He said he spends his days working with family and friends from his church to rehabilitate buildings and properties in his hometown.