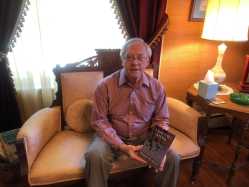 Southeast emeritus professor Robert Hamblin recently self-published his first novel, "Leaving Here." The book is set in a small Missouri town in the 1990s and focuses on gay rights.

The story follows a depressed lawyer on his journey in search for a reason to live. He befriends a group of lesbian women whom he helps fight for their rights.

This is a fictional novel, but it is based on a variety of events Hamblin has put together over the years from others’ personal experiences. An attack of lesbian women in south Mississippi helped inspire the story.

“I knew about that incident, and all of us have family members or friends who are gay and we are aware of how over the years they have sometimes been mistreated, even discriminated against,” Hamblin said. “It was just an issue that I had over the years and had been concerned about, and I guess that was the basis of the novel and I wanted to have my say.”

Hamblin considers this book to be a bit heavy-handed.

“It’s a sermon and didactic but I wanted to say it and it was something I thought about equal rights,” Hamblin said.

Hamblin is the founding director of Southeast’s Center for Faulkner Studies. He has written 20 scholarly books, six books of poems, four biographies and three personal or family memoirs. Although "Leaving Here" is his 34th book, it is his first novel.

“I’ve never felt like I had the discipline or the ability to write a long fiction narrative,” Hamblin said. “It’s always been a thought in the back of my mind that I would like to try one.”

Although the book is selling on Amazon and getting positive feedback from most of his friends and people in the area, Hamblin does not think those things determine how successful his book is.

“I’ve never had a bestseller; this book won’t be a bestseller; it won’t be made into a movie,” he said. “The fun to me is seeing that blank screen and seeing a word, phrase or sentence and seeing if you can make something out of it; it’s not the end result.”

Hamblin encourages everyone to read the book, especially since it is set in a “hostile period, so it has history behind it.”

He hopes everyone would set aside their differences to give the book a read.

“I would hope that people of all persuasions, and religious backgrounds would be concerned about justice, fairness and equal rights,” Hamblin said

Hamblin published the book on CreateSpace on Amazon. He said he did not want to go through an agent to have his book published because he has never had one in the past.

You can purchase a copy of the book online at amazon.com or at Left Bank Books, a local bookstore in St. Louis, Missouri.