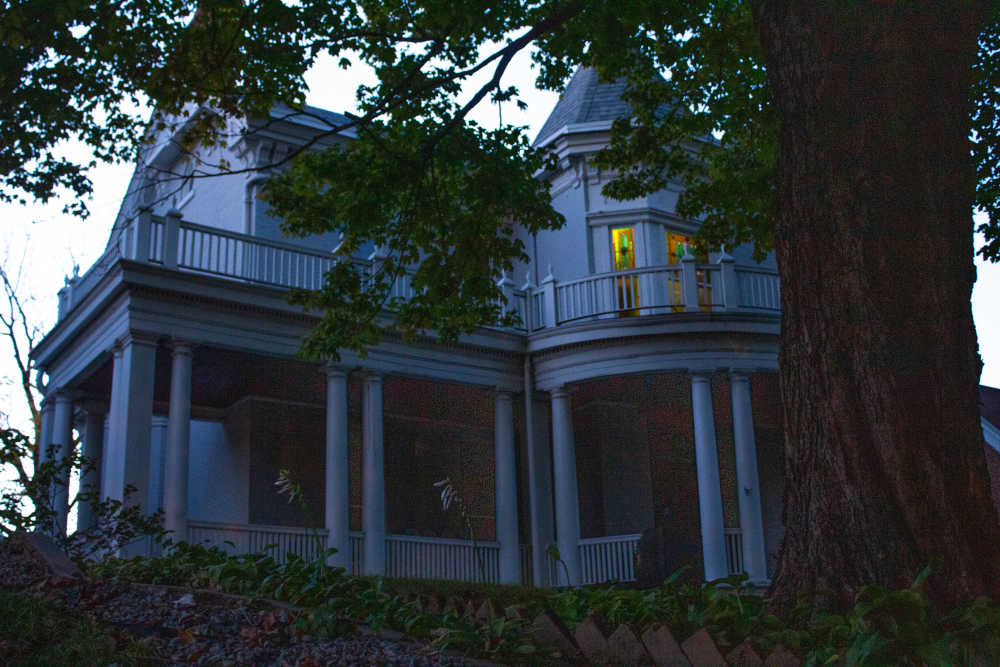 Overlooking the Mississippi River, neighboring the River Campus, is a piece of history unknown to many Southeast students. The grand stature of the Glenn House whispers tales of prestige, wealth and opulence of the past, but inside, those whispers turn into groans, footsteps and shadowy figures.

Built in 1883, the Glenn House is a Victorian-style home constructed by Edwin Deane, an architect from Kentucky and father of Lula Deane. Deane built the house and gave it to Lula and her new husband David Glenn, as a wedding gift.

Co-president of the Glenn House board Christy Mershon said Glenn was not a wealthy man — as he moved to Cape Girardeau with just the change in his pocket.

“He had relatives here who were in the bar business at that time and some other entrepreneurship throughout the Cape Girardeau community,” Mershon said. “So he knew he had a place to work if he could get here.”

Glenn and Deane married and became a prominent family in Cape Girardeau. Glenn was a merchant, owned a bank and was influential in the community. However, the Glenn family fell on hard times in the early 1900s when Glenn’s bank failed.

“Shortly after the turn of the century, that bank went under,” Mershon said. “There was no FDIC, so the house was sold at the courthouse square.”

The Glenn’s never lived in the house again. Eventually, the house was owned by the Erlbacher family.

“They purchased the house because it was in very bad shape; they were fond of the house,” Mershon said.

The Erlbacher family deeded the house in 1974 to the Historical Association of Greater Cape Girardeau for it to be preserved.

Tom Neumeyer, a former Glenn House board member and current member of the Historical Association of Greater Cape Girardeau, has been involved with the Glenn House for many years. He and Mershon have a long history of giving tours together at the Glenn House. In fact, they have encountered so many ghosts while giving tours they have worked out a nonverbal code when something goes awry.

“If something unusual goes on, we give each other the one eyebrow up,” Neumeyer said. “Then there’s two eyebrows up, and then there’s run for your life.”

A few years back, Neumeyer and Mershon were giving a special tour with a group of mothers and sons when they almost made a run for their lives.

“It was about 10 or so mothers, and at the time, the boys were 17 or 18 years old,” Neumeyer said. “Christy and I were on the front porch, right by the front door, and the mothers and teenage sons were kind of gathered around us when we started talking about the ghost.”

The ghost Neumeyer and Mershon were speaking of is that of a little girl. A member of the Glenn’s extended family, who died of an illness in the house. Neumeyer said the ghost is responsible for moving items around the house, footsteps and making noises.

“We were talking about the strange noises and from inside the door, we heard a strange moaning,” Neumeyer said. “She and I both heard it and we looked toward the people and they didn’t hear it, and we kind of gave each other that look and decided to keep going.”

Neumeyer and Mershon continued with the tour, talking about the ghost when just a few seconds later the strange noise from behind the front door got louder. Neumeyer described the noise as a cat screeching when its tail gets stepped on.

“The people in front [of the tour group] heard it and kind of looked at each other, and we just kept going,” Neumeyer said.

But the ghost was not going to be ignored and finally let out a monstrous cry.

“It sounded like two cats being dropped into a gunny sack and just tearing each other apart. It was loud, and everybody heard it,” Neumeyer said.

Neumeyer and Mershon went inside to check out the noise but nobody was in the house and the doors were locked. There was no possible explanation of the three noises. But everyone heard it.

About 15 years ago, the board of directors had an evening meeting in the dining room of the Glenn House. After everyone’s arrival, the doors were locked and the meeting began. During the meeting, all of the board members heard the front door of the Glenn House open and heard footsteps scamper into the entryway, up the stairs, down the hallway and into the children’s bedroom.

“They stopped the meeting, everyone looked at each other and asked each other if they heard something,” Neumeyer said.

A few members swept the house to look for the uninvited guest but found no one. The front door of the house remained locked. Since this occured during a board meeting, the moment was recorded in the minutes.

“One of the board of directors is a retired university professor and he said up until then he did not believe in ghosts, but that moment changed his perspective,” Neumeyer said.

Volunteers at the Glenn House decorate for Christmas each year. For many years, a Christmas tree would be placed in the home and empty boxes would be wrapped to resemble Christmas presents. But this holiday tradition ended because each time the presents were wrapped, the next day they would be unwrapped and opened.

“She [the ghost] would come down at night and open the presents looking to see what was in them. It happened more than once, so they quit doing it,” Neumeyer said.

A local television station contacted Mershon to do a Halloween story for a morning show. Mershon and the television crew met downtown on the riverfront on an early, foggy morning. Once the shoot was completed, they asked Mershon if they could get color-footage at the Glenn House. It was still dark when Mershon took the camera crew to the Glenn House. There, the T.V. crew wanted to shoot with just the lights from the camera.

“We got to the door that we had come in and got ready to leave and right as I was getting ready to realarm the alarm on the house, from inside we heard this incredibly loud crashing noise,” Mershon said. “It sounded like every door in the house had slammed at the same time. It was like the whole house vibrated almost.”

The television crew ran back into the house, filming, while Mershon stayed and guarded the door.

“When they came back out they were able to show me film footage that indicated there was not a single closed door in the entire house,” Mershon said. “We still don’t know what we heard, but it audibly picked up on their footage.”

The Glenn House was once filled with life of a family that saw happiness and sorrow, success and failure, love and loss. Its doors still open to welcome people in to experience the stories of a past told by the ghosts that lived it. For more information visit www.glennhouse.org.