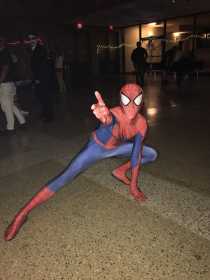 No matter what country you're from, a mask-wearing man wielding a chainsaw is a scary sight.

So it wasn't surprising to see Egan Herron come away as the winner of the best costume contest at the International Student Association's Halloween party Oct. 20 at the University Center Ballroom.

Herron, who was surprised he won, put a lot of thought into coming as the apron-wearing Leatherface from "Texas Chainsaw Massacre."

”I had this thing planned for like a year now that I was gonna dress up as this character and I was gonna do it very well so I was like you know this is the perfect time,” Herron said.

The event was open to all students. There was free food, uniquely named “Bloody Mary” and “Monster Mash” Halloween themed drinks, and entertainment for everyone in attendance. In the ballroom there was a photobooth for students to pose and take pictures. 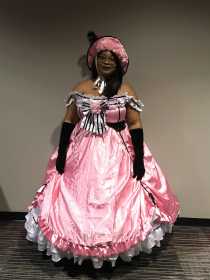 “It gives people the chance to be themselves and express themselves, and share their cultures to other people and also take some from others. It’s kind of like an exchange,” ISA president Avra Mukherjee said. “Since a lot of countries don’t celebrate Halloween, they get an opportunity to celebrate it because it is celebrated in the U.S.”

President of ISA and junior Avra Mukherjee said the ISA party is her favorite event and she loves dressing up. This is her first semester being president.

“ISA is a group of people from different cultures that aim to bring each other together from around the world,” sophomore and ISA member Yuka Sugiura said.

There were a variety of unique costumes such as Spider-Man, the Joker and Tinkerbell, but two stood out among the others.

The winner for best costume for women was Ashleigh Taylor. She wore a pink ball gown dressed as her favorite anime character, Ciel Phantomhive from the Japanese manga series, “Black Butler.”

This is one of the many events that ISA holds to help people from different cultures come together. Some other events ISA hold are sunset hiking or Carpe Diem.