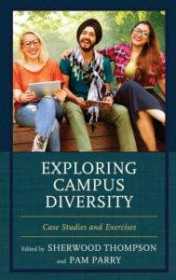 “Exploring Campus Diversity: Case Studies and Exercises” will be available Nov. 15. It can be purchased on Amazon or through Rowman & Littlefield Publishers.
Submitted photo

Diversity in schools has been a prominent topic of discussion recently, Southeast professor Pam Parry has teamed up with fellow faculty members in the editing and writing of a new book that may fuel the discussion.

Parry co-edited “Exploring Campus Diversity: Case Studies and Exercises,” along with Sherwood Thompson, a professor at Eastern Kentucky University. The book will be released Nov. 15 and includes entries and discussion questions on diversity issues and discrimination.

“Exploring Campus Diversity” goes in-depth on ways to encourage and initiate diversity on college campuses. It was done with the help of 23 contributors, four of whom are faculty and staff members of Southeast.

Sonia Rucker, assistant to the president for equity and diversity and dean of students, wrote an endorsement on the book’s back cover. Associate professor of mass media Tamara Zellars Buck wrote three chapters discussing things such as student media and portraying diversity in publications. Assistant professors of educational leadership and counseling Kirsten LaMantia and Holly Wagner provided three chapters in collaboration on topics such as discrimination toward the LGBTQ+ community.

Each contributor submitted between one to three chapters, resulting in 38 case studies and discussion questions. Parry says having as many voices as possible was vital.

“I think that’s one of the things that makes a book special,”Parry said. “If you are going to talk about respecting voices, you need to have more than one.”

Parry and Thompson spent almost two years producing “Exploring Campus Diversity.” Parry said Thompson wrote the proposal for the book and did research for the book. Thompson researched existing material and found their type of book, when released, would be one of few on the market.

“We couldn’t find a case study book just like this,” Parry said.

Although the book has been written to service undergrad courses, Parry said students of all classes will enjoy this book. The faculty members can utilize the discussion questions as forum questions for online classes. The contributors said they hope to spark conversations with their case studies on topics such as First Amendment rights and immigration.

Parry and Thompson have another book about gender discrimination against women in academia. Parry said she likes the idea of having a book that is inclusive and encourages readers to create the best environment for everyone.

“I hope they take away that they’re part of the solution that they find the answers to these questions, and then they implement it in their lives,” Parry said. “We can raise the issues. We can advance the conversation, but it is going to take all of us. We are all part of the solution. Everyone who reads this book has a role to play in making this a better world for everybody.”

Parry and Thompson have already begun discussing a third book, Parry said, but there is no subject chosen at the moment.