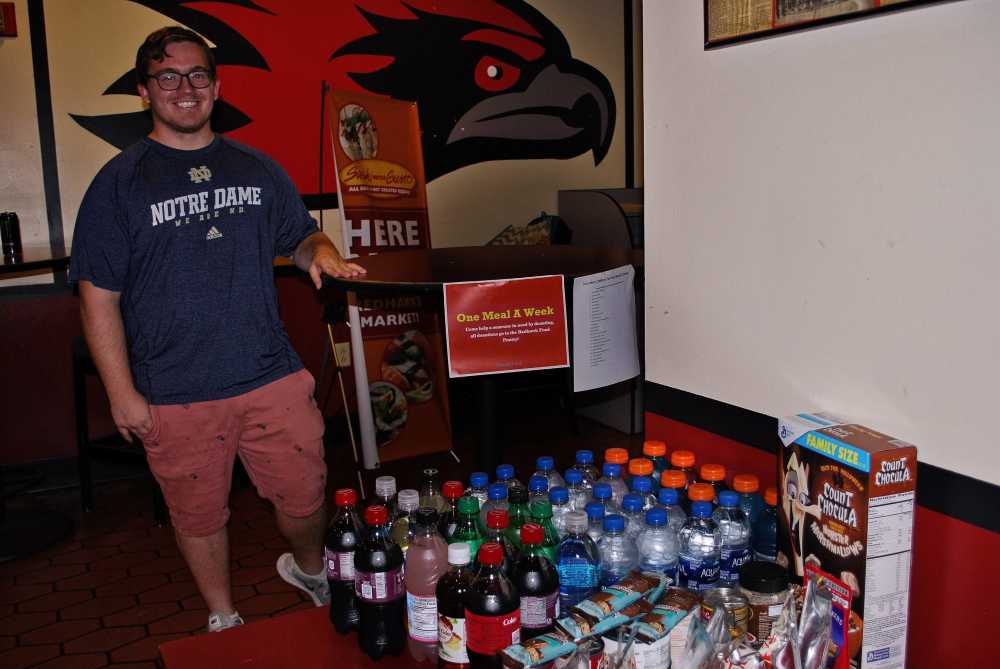 Gabrione Kent poses near the food donated to the pantry in Rowdy’s.
Photo by Cordie Taylor

Gabrione Kent, a junior majoring in entrepreneurship, developed One Meal a Week to collect extra meals for donations on campus.

The program allows students on a meal plan to donate extra meals or guest meals that may eventually go to waste to the Redhawk Food Pantry.

“I am going to school to start a charity,” Kent said. “It’s what I am trying to do eventually, so this is just helping me figure that out.”

Kent’s employer, Ally Holland, encouraged him in his efforts to start One Meal a Week.

“[Holland] has encouraged me so much in this process and One Meal a Week would have just remained a hypothetical idea rather than something I did,” Kent said.

He spoke with assistant professor Steven Stovall, Chartwells director of Marketing and Student Engagement Alicia Ticer and many more to receive approval for the project.

“I didn’t want to step on anyone’s toes, upset anyone or go over anyone’s head, so I asked everyone,” Kent said. “Everything just slowly went my way.”

Kent sets up a table in Rowdy's on Fridays where he collects food and drink items bought by the extra meals of students.

“The Redhawk Food Pantry was all for it,” Kent said. “I don’t know how many donations they get.”

The amount of food and drink items he collected on his first day was equivalent to $231.

He created a list which converted the cost per food item to make donating extra meals easy.

Students will use their extra meals at the end of the week to purchase, for example, 24 waters. Kent did so last year and wanted a change.

Kent said he hopes students will make a donation rather than stockpile drinks with their extra meals.

He said he tells students where the donations will go and how it can help people when they consider donating.

“How could people be spending eight meals on Gatorade on a Saturday and some people aren’t even getting enough to eat, that’s ridiculous to me,” Kent said.

Fifteen percent of students reported an inadequate food supply at least four times during the fall semester, according to a fall 2016 student survey conducted by Student Government Association.

He said he plans to reach out to students who may be leaving for the weekend to collect donations.

When Southeast president Carlos Vargas visited Kent’s workplace on Sept. 26, Kent approached him about his idea.

He said Vargas loved the idea and was absolutely on board with it.

Kent has worked with associate vice president for Student life Bruce Skinner to establish a collaboration with Greek life for service hours for those who get involved.