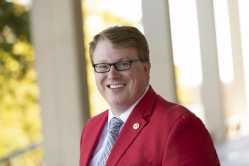 Gasser said he was very excited when he found out he got the job when the interim vice president for university advancement and executive director of the university foundation, Trudy Lee called and gave him the news.

“It was a great moment, this is something that I’ve been wanting to do for a very long time,” Gasser said.

Gasser said his new responsibilities include overseeing homecoming and planning events for alumni. He also talked about building relationships with alumni and establishing a strategic plan so the events held across the country for alumni are worth the effort for everyone.

“This position is really focused on building a base of alumni who care, and remember how great their time at Southeast was and how Southeast helped them become who they are today,” Gasser said. “A lot of the things within the foundation and advancement are fundraising based, and this is not a fundraising position, this is a friend-raising position. It really is about building friendships with alumni.”

Gasser is taking over the position from Jay Wolz, who recently retired. He mentioned how he has talked with Wolz and Lee to achieve the most he can with his new role.

“We are very excited to have George join the Advancement Division in this important position,” Lee said. “He has served the university a lot during the past 10 years working with Southeast students, and I believe he will be equally successful working with our alumni.”

He said he plans to apply what he’s learned from admissions to the alumni position. He hopes to get a better understanding of the job itself along with those associated with it.

“The other big role is to help alumni understand how important they are to the university in a way that makes them understand their role in the lives of our students who are currently enrolled-the questions, concerns and worries that students have everyday,” Gasser said.

He officially takes over the position Nov. 26, which also marks the start of his ninth year working at the university.