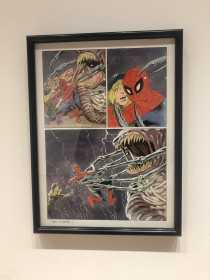 The Crisp Museum has opened the doors for another art exhibit that will run through Jan. 27, 2019.

This gallery is a collection of never-before-seen comic book and semi-realistic art that includes images from science fiction entities such as “Star-Trek” and Marvel comic books.

Museum curator Jim Philips said this is the second comic book art exhibition in Crisp’s history. The event was held to coincide with Cape Comic-Con on Nov. 3, which will feature a comic art drawing contest.

Terry Godwin, an investment banker and artist located in Cape Girardeau, has an extensive collection which was pieced together through decades of production. Some of his comic strips have been carefully preserved from the 1970s, and others were as recent as 2018. Characters in Godwin’s gallery included Batman, Harley Quinn, Hulk, Tarzan and The Fantastic Four, along with assorted lesser known sci-fi heroes and villains like Jack Dundee and John Carter.

Most of the artists in the exhibit such as Max Texeira and Frank Frazetta, have worked on notable comics and publications. This work includes the likes of Marvel’s Avengers, Iron Man, Transformers, Ghost Rider, Punisher and Wolverine.

Among rarities in the exhibit, there also were several first editions, a proverbal golden nugget in the comic book community. The first editions included “Star-Trek: The Next Generation” (1988), “Annual Star-Trek: The First Mission (1985)” and “Marvel Comics: Shuri (2018).”

Original publications of the art ranged from “Mad Magazine” to miscellaneous graphic novels.

The artists commonly chose ink on paper, though mediums such as oil and colored pencil can be observed throughout the gallery.

Crisp Museum typically exhibits popular or regional history, and for it to include the comic art collection of a local artist is still a new thing for the establishment, Phillips said. The museum plans to hold a comic art gallery every two years, Phillips said, in conjunction with Cape Comic-Con when possible.

“The idea is to maximize people’s interests, while not burning them out on the subject.” Phillips said.

He said it also is the reason the museum holds these events sparsely. The last comic art exhibit, “Heroes, Villains, Monsters,” was held in November 2016 and ran until January 2017. Phillips said the previously displayed gallery showed artwork from four comic and semi-realistic artists, Rick Burchett, Terese Nielsen, Bill Stout and Paul Gulacy. The latter has art on display in Godwin’s collection.

To see more of Godwin’s collection, visit the Crisp Museum located at the River Campus. The gallery will be on display from 10 a.m. to 5 p.m. Tuesday through Friday, 1 to 4 p.m. on weekends until January 27, 2019.