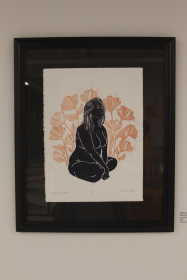 "Among the Flowers" by Madison Ellers at The Catapult Creative.
Photo by Katya Chronister ~ Arrow Reporter

Artists’ deepest struggles and loves are shown at First Friday with the Arts on Nov. 2.

Catapult Creative House Student Studios held a closing reception for its third Artist of the Month for Southeast senior art education major Madison Ellers and her exhibit titled, “Among the Flowers”.

Ellers’ exhibit is a series of prints conveying the struggles with her body image and her love of nature. Most of the prints are a relief type of printmaking, meaning they can be made over and over again. The others are a monotype of printmaking, that only allow for the original. 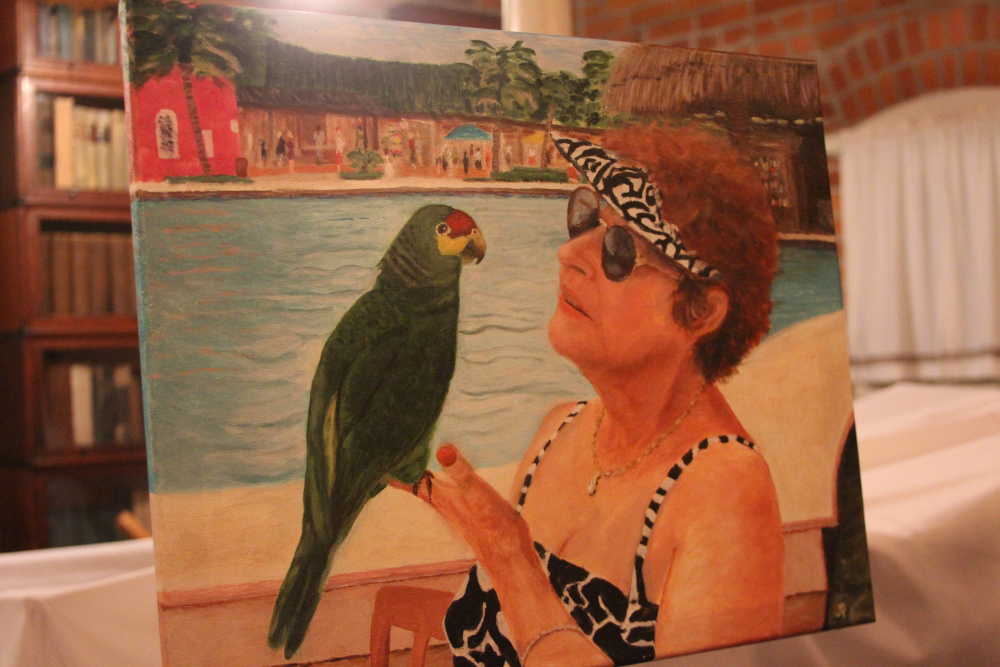 “I’ve always been drawn to things with the figure and things with nature. That’s what I like making art about the most,” Ellers said. It was part of the First Friday exhibits on display for November, which also included the works of James Palen and Dave Carter at the Glenn House.

Bringing together her loves of the human figure and nature, Ellers depicted how she saw herself through each stage of her journey to accepting her body. The process became a form of therapy for her.

“I’ve always had issues with body image, so I thought, ‘What if I could use my art to make therapy for myself to confront these issues and hopefully grow from that, which I did,” Ellers said. “By making art about my body I grew a lot in how I see myself, how I except myself, and how I love myself.”

Ellers wants those who view her art to realize they are allowed to love themselves, as well.

The exhibit bears the title of its main piece. Ellers said it is about how she is finally at peace with herself.

“By placing myself among natural imagery, among flowers and asserting that I am something to be loved, I am something that’s beautiful, and I should see myself as that, and so should others,” Ellers said.

Carter taught Palen how to paint, and Palen is a family practice physician who has only been painting for a year.

“I always enjoyed art, but I could never paint or draw but I could take photos. I’ve always wanted to do what I do in photography in paint,” Palen said. “As I was slowing down the practice, I had more free time than I wanted, so I decided to take up painting and got Dave to be my instructor.”

Most of Palen’s work is of various landscapes but his wife is another subject that appears frequently.

“The things I choose to paint revolve around the things I like and photos that I take and like, and that mean something to me. They also were different in that that it would teach me different techniques,” Palen said.

Carter has been painting for 50 years, but doing art for a total of 63 years and said he does not plan on stopping any time soon.

“I’m going to have to live to 200 because I have tons of paintings I want to do,” Carter said.

Carter’s work also begins with photos before being transcribed into paintings.

“I take tons of photos, which is why I have so many paintings to do,” Carter said.

His piece titled “Amberwing Dragonfly”, a close up of a stuck dragonfly on a fence used lots of color and showed a different view of what they look like.

“It’s fun to me because that really is what it looks like, but when its portrayed a somewhat different way it becomes special,” Carter said.

These exhibits will be on display at The Glenn House throughout the month.