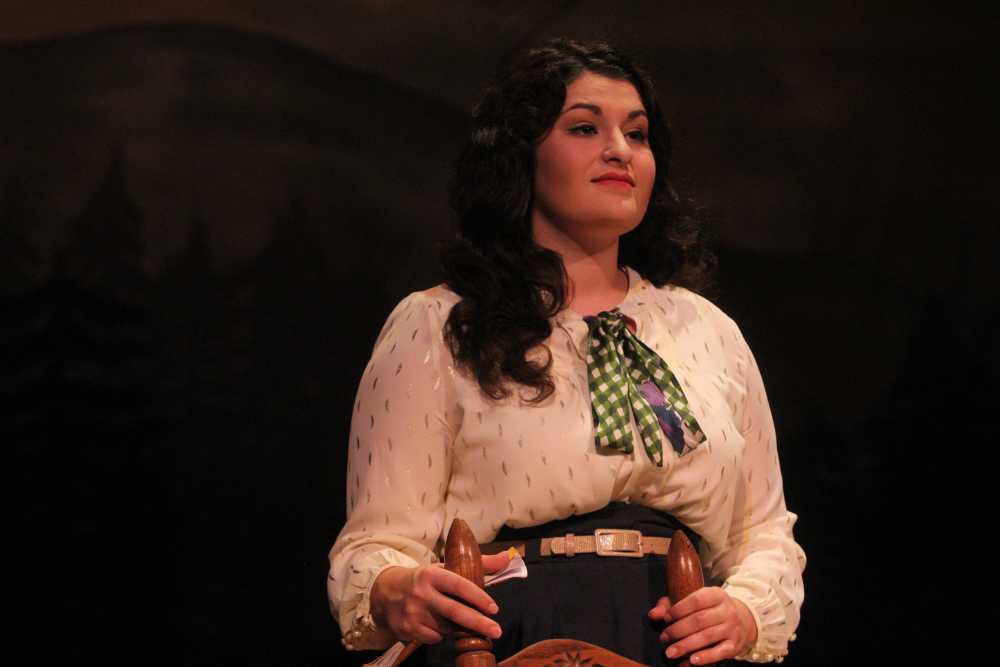 She recently celebrated her 21st birthday on stage for the opening of “Our Town” as a leading role — the first of her career.

Her first semester she was enrolled in 17 credit hours, cast in a supporting role and joined the Alpha Delta Pi sorority.

Bucci received callbacks from auditions multiple times since her freshman year, but often lost the parts to older students. The rejections did not slow her down.

She began studying improv and sketch comedy at Second City in Chicago. She created a sketch comedy group and joined an improv group. Bucci spent a summer at a 10-week acting program at a Stella Adler school in Los Angeles to hone her craft. She saved up for a year to afford the tuition.

“I have never been pushed more,” Bucci said. “When you’re outside of the university, the teachers can be as harsh as they want to be.”

One teacher told her that watching her scene was like watching paint dry.

“I think the teachers [at Southeast] really saw the improvement and dedication that I’ve had even from not getting cast,” Bucci said. “It pays off, but it took a little bit.”

Bucci starts her day early with class or work before reporting to rehearsal for "Our Town.”

“Everyone I come in contact with feels like they never see me because my time is spread so thin,” Bucci said. On top of her, character, Stage Manager, in “Our Town,” Bucci is enrolled in 21 credit hours, works a part-time job and is active in a sorority. But the 12-hour weekdays are not enough for her. She spends her weekends as a server at Minglewood.

Bucci said she has gone through a roller coaster of emotions when considering if she should drop a major before always deciding it was worth it.

She auditioned for other universities before deciding to attend Southeast.

“Every [other university] I auditioned, they wouldn't let me double major,” Bucci said. “Then I came here to audition and Kenn Stilson, the chair of the theatre conservatory, said, ‘Well, I mean, it’s your college degree. We can’t really tell you ‘no.’”

When she was not getting cast, she decided to take on more academically.

“It was hard. What stinks about it when you’re in college — in the real world, you get rejected from auditions all the time — in the college setting, it’s all your friends in rehearsals and you’re not,” Bucci said.

She said it is socially hard, but there are always productions to be involved in.

She said “Our Town” is an immortal tale of small-town morality. Set in Grover’s Corners, the play deals with daily life, love and marriage, and death and eternity.

“I went from no roles to the biggest one with the most lines, which is such an awesome challenge,” Bucci said.

Bucci said her character, Stage Manager, communicates directly to the audience, which is similar to the interaction of live comedy.

Bucci created a sketch comedy group, “Spork Nation,” as a way to create her own opportunities.

She said she was not getting cast or in rehearsals so she wanted more to do with her time.

“The coolest thing about [comedy] is that you can get people into that mindset of, ‘Oh, I’m not going to think,’ but you get them to think and you can talk about all the hard-hitting stuff in society that people typically won’t listen to, but they’ll listen because it’s comedy.”

After a few “Spork Nation” performances in Cape Girardeau, the group went on to participate in festivals such as Chicago Women’s Funny Fest and iO Theatre in Chicago.

The group applied for the Chicago Sketch Comedy Festival and hopes to have a fresh, 45-minute show by December to perform in January, if accepted.

Bucci said her downtime consists of Sunday mornings watching the episode of Saturday Night Live from the previous night, and not much else.

“I love comedy because it’s an escape,” Bucci said. She said the best way to de-stress is to go watch an episode of Friends or any comedic thing. Sometimes, though, Bucci said the stress does get to her. The mental and physical stress of Bucci's schedule certainly catches up to her from time to time.

“You have your nights when you cry — you go sit in your room, you cry about it, you’re stressed and you freak out and then you get past it and get your stuff done,” Bucci said. “Crying is not going to get anything done, except for making you feel a little bit better.”

Bucci said the workload is heavy, but she enjoys everything she does.

“[Being an RA] actually burnt me out really quick because I don’t think my mental health was really ready for it,” Bucci said. “It brought out anxiety that I didn’t know I had.”

She said she balances academics and “Our Town” by prioritizing deadlines. Her days consists of class, homework, rehearsal, more homework until around 11 p.m. and then knocking on doors in her sorority house to ask who was up to help run lines with her. Bucci said she has late nights and early mornings.

“[The stress] is a nice source for all of my comedy. I get the weirdest server stories [from work],” Bucci said. “It feeds everything I do.”

Bucci said her idol is Tina Fey, who started at Second City in Chicago, where she changed the face of the program and their views on gender roles.

She hopes to write or perform on Saturday Night Live or be on a sitcom in Los Angeles.

When asked what life would be like if she were less busy and involved, Bucci said “I’d be bored as hell.”