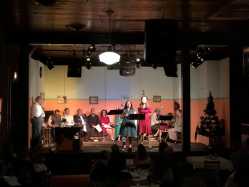 The cast returned to the stage after the break to enjoy Brooke and Brown's singing.
Photo by Hailey Hampton ~ Arrow Reporter

River City Players Community Theatre got into the holiday spirit early this year with the production of the live radio play of “It’s a Wonderful Life” in a dinner show running through Port Cape.

River City Players’ president Roseanna Whitlow-Greenwood, a retired Southeast speech professor, made the decision to put on the play, which ran Nov. 8 to 10.

She brought this show to the director Holly Raines who said she was thrilled to take on the Christmas classic.

“I always wanted to do a Christmas show since we hadn’t done one in awhile,” Raines said.

River Players Community Theatre is the only group that does dinner theatre in the area.

The 20-member-cast was larger than Raines typically works with, but it brought a lot of new talent to the theatre group.

“It was hectic, but I knew that with the talent that I had we would be OK,” Raines said. “I never worried or had any doubts.”

In the cast were Molly Wilhelm and her 11-year-old daughter Audrey Wilhelm. The mother played the characters of Violet and Ruth while Audrey played the daughters of George Bailey, Zuzu and Janie.

“This was a fun chance for us to get to act together,” Molly Wilhelm said. “It’s been really fun.”

This unique version of the film classic of “It’s a Wonderful Life” was set in the late 1940s and had the cast portraying actors in a radio station broadcast. It was not a typical play as they were confined to standing around the few microphones on stage.

“Seeing it as a radio play you pay more attention to the dialogue,” Raines said. “You hear those famous lines.”